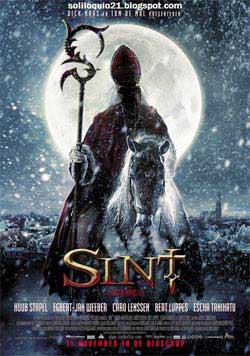 I watched Dick Maas’ latest movie Sint (“Saint” in English) this evening, and it was a pleasant surprise. It wasn’t anything deep or thought-provoking, but it doesn’t set out to do anything like that. It doesn’t take itself seriously, and it certainly doesn’t shy away from humour. Which is a good thing, because however you want to put it, its still a horror-movie about Sinterklaas (a Dutch ‘Santa Claus’-like tradition) so anybody who expects anything different is clearly in the wrong place with this movie.

The acting in Sint is bad, there’s no other way around it. Some actors are better then others, but most of them just don’t give a credible performance. The protagonist police-officer shines the most with his inability to act and deliver his lines properly. In no way does this really harm the movie though; it only confirms that this movie is all about the action, and it delivers very well in that aspect. Dick Maas is still very good at directing chase-scenes, and the chase-scene with the Sint riding his horse over the rooftops of Amsterdam is very impressive and easily one of the best moments of this movie.

Sint seems mostly straightforward with the plot, and it makes the movie seem a little rushed at times. This way the movie isn’t as scary as it could have been, but seeing as they hinted at a sequel at the end perhaps they will make up for that. The Sint himself for example doesn’t have that much backstory except for the fact that he is childkiller who got burned to death by villagers out of revenge. The Sint (played by Huub Stapel) also never speaks, save for some mumbling here and there. His make-up and overall appearance is awesome though, and my respect goes out to the make-up department for making him look as depraved as possible even if he doesn’t have that much character.

If you’ve seen Dick Maas’ earlier movies you kind of know what to expect. It has a few elements of Maas’ earlier action/horror movies like Amsterdamned. Take some friends with you to the cinema, grab some popcorn and have fun! Just make sure there’s no horse falling on your car.