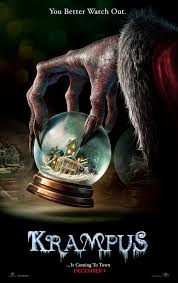 Ah, the horror-comedy. How I love thee.

A sub-genre that is all too often dismissed, misunderstood or neglected altogether. Yet also a sub-genre that paves the way for some of the most wickedly entertaining and genre-bending classics of all time- just take a look at “Gremlins” or “Evil Dead II” for some of the finest examples of horror-comedy done right.

And for this fan of horror and of horror-comedy, “Krampus” is definitely a wonderful new treat. Especially as, just like “Gremlins”, it’s not only a horror-comedy, but also a prime example of a holiday-themed horror-comedy done near-perfectly, save for a few issues here and there.

Director Michael Dougherty is certainly no stranger to either sub- genre- his previous directorial effect (the excellent “Trick ‘R Treat”) also fit into both categories and is arguably the best Halloween- themed horror flick of the past several decades with its savage sense of humor and some genuine eerie thrills. So it’s a lot of fun seeing him lend his unique sensibilities to a Christmas- themed film.

The film focuses on a young, somewhat troubled boy named Max (Emjay Anthony) who is struggling with some Christmas-blues during the holiday season. He’s just gotten into trouble for causing a fight, he worries that his parents (the wonderful Toni Collette and Adam Scott) are drifting apart and that he’s similarly losing his friendship with his older sister (Stefania LaVie Owen)… and to top it off, he has to contend with his irritating extended family who have come to spend Christmas with he and his parents.

After a disastrous diner, Max loses all faith in the holiday spirit, and tears up a letter he had written to Santa Claus, casting it out of the window, unaware that his actions will summon a dark force- the “Shadow of Saint Nicholas”- “Krampus.” Now, Max and his family (under the guidance of his elderly German grandmother played by Krista Sadler) will have to struggle against Krampus and his legions of demonic toys, killer-gingerbread-men and freakish devil- elves to survive.

The success of the film really does fall back on Dougherty and his expert blending of both broad and specific types of humor in addition to a few genuinely creepy set-pieces, and the wonderful casting of the film that lends to all characters- even an irritatingly uber-conservative gun-nut uncle played by David Koechner (frankly a character you’d usually love to hate)- being inherently likable and enjoyable to root for as they deal with the onslaught of Christmas-chaos.

There’s also plenty of great callbacks to old-fashioned 80’s cheese and wonderful old film standards of the holiday and holiday-horror genres, which give the film great character in and of itself. Particularly notable is an animated flashback sequence explaining the character of Krampus that is done in such a style to invoke notes and feelings of those old, schmatlzy Rankin-Bass stop-motion Christmas specials.

Though despite how wonderfully entertaining and stylish the film often is, it does have a few issues. Even though it’s only about 98 minutes, it does drag a bit in the first half (it honestly could have been trimmed down to an even 90 minutes and it probably would have flowed a lot better) and I do think the titular “Krampus” is held off on a bit too much until the final act. I know the classic cliché is “don’t show the monster too much”, but I think the film could have used another glimpse or two of him instead of relying so heavily on his freakish (and freakishly entertaining) “minions” as often as it does.

I also will say that this is definitely a horror-comedy through-and- through, which I don’t think was illustrated properly in the marketing. So be aware of this going in… because I’m sure there will be some audiences who are unaware of this, or just don’t enjoy or understand the horror-comedy sub-genre, and may emerge disappointed that it wasn’t just a straight-forward horror film.

But regardless of that, I honestly can’t say enough to recommend this film to horror fans, and ESPECIALLY to horror-comedy fans. It has a few kinks that could have been worked out, but they are just small chips in an otherwise exceedingly enjoyable and thoroughly entertaining ride to Holiday-Hell!

I give “Krampus” a very-good 8 out of 10. It’s not for everyone, and people who aren’t fans of films that blend genres will probably not enjoy it, but open minded audiences and genre fans should eat this up! It’s definitely joining “Gremlins” and “Die Hard” on my list of “Must-Watch Alternative Christmas Films” that I view every year!