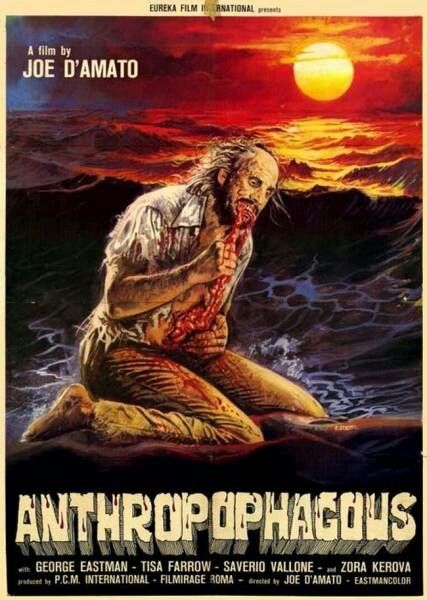 Well, I FINALLY got to see this infamous shocker after hearing about it for years. ‘Antropophagus’ a.k.a. ‘The Grim Reaper’ is one of the most despised and loathed of all the so-called “video nasties”, and director Joe D’Amato seems to be regarded as little more than a figure of fun for many. The people who hate this movie usually call it “boring”, “dull”, “too slow”, and so on for the most part, and then complain about the bad taste of the two infamous gore scenes towards the end. One involving a pregnant woman, the other the killer. I won’t go into any detail regarding either scene so as to not lessen their shock value. Now, the strange thing is I inadvertently watched the DVD of ‘The Grim Reaper’ which cut both of these scenes out, and while I was sorely disappointed not seeing them, I didn’t find the rest of the movie dull at all. In fact I thought the movie managed to create quite an effective feeling of dread and suspense throughout. While I don’t think the movie is as strong as Fulci’s ‘Zombie’ (which also starred Tisa Farrow), I enjoyed it a lot more than say, ‘Zombie Holocaust’, which is generally rated higher by many hard core horror fans. So make of that what you will. My advice though is try and see the original uncut ‘Antropophagus’ for maximum effect.