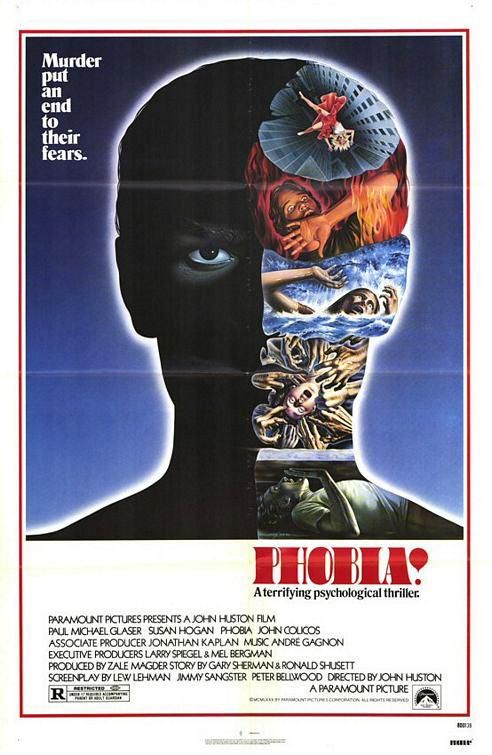 The late, great John Huston apparently went on a bender and woke up in Canada where they plopped him in the director’s chair to helm a tax-shelter “psychological” horror flick remarkably similar to “Schizoid”, a slightly better Klaus Kinski vehicle released the same year. An unorthodox psychiatrist finds that his patients are being murdered, ironically in ways that play to their greatest phobias. So who could be the killer? Well, I won’t spoil it, but all you have to do is looking at the frickin’ tag line.

Besides being generic and dull, the main problem here is the male lead. Canadians do tend to have an inferiority complex sometimes, but I find it hard to believe that they couldn’t have found a greater thespian talent in that entire country than “Hutch” (or was it “Starsky”–I get confused?). Paul Michael Glaser gives a central performance that is every bit as compelling as paint drying. As for Huston, this fortunately wasn’t his swan-song–he ended his life with an impressive troika of films, “Under the Volcano”, “Prizzi’s Honor”, and “The Dead”. This was merely an unfortunate misstep for him.

The only good thing I can say about this (and I’m really clutching for straws here), is that, also like “Schizoid”, it does have a surprising and uncharacteristic nude scene by a young lovely of the Canadian tax shelter era. With “Schizoid” it was Donna Wilkes; here it is Lisa Langlois, who was in Claude Chabrol’s “Blood Relatives” and any number of Canadian films better than this (maybe THAT was the whole reason I watched this years back–who knows?). Other than that small favor though its eminently forgettable