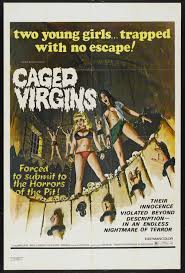 Erotic-horror from French master Jean Rollin about two fugitive girls (Marie-Pierre Castel, Mireille Dargent) who are on the run from the law and end up in a creepy castle where many young women are chained in the basement. The girl’s learn that vampires run the castle and they want the two ladies to join the undead since they are virgins. With countless horror and porn titles under his belt, to me this is the best that Rollin has to offer as his art-house style perfectly blends in with the erotic nature of the subject matter and best of all is that the film never once feels too long nor does the pacing have any issues. One might say THE LIVING DEAD GIRL is the best the director has to offer due to how violent and gory it is but I think on the whole this here is the best. I think what works so well is once again that beautiful atmosphere that the director is able to bring. The movie really does feel as if you’re watching a nightmare as there’s this quiet, still atmosphere that really makes you feel as if you’re in the land of the dead. I thought the opening fifteen or twenty-minutes is where the director really works his magic because we see the girls on the run, going through the county side and eventually arriving at this castle. I thought Rollin did a very good job at building up this atmosphere and things just turn downright crazy once the vampire enter the picture. The highlight of the film is a rather long sequence where several of the male vampires go into the basement and attack the women that are chained up. Full nudity galore as this sequence clocks in at nearly ten-minutes and it’s nothing more than the men groping the woman and I’m certain this was done so that the male viewers could get more than just a eye-full. This sequence is tinted in this strange pink/rose color and it really adds to the film and the downright surreal nature is just untouched by anything else in the film. The rest of the movie deals with the women trying to decide if they should give in or not and of course there’s more violence and nudity. I thought both Castel and Dargent were very good in their roles and the supporting cast isn’t too bad either. They’re all certainly a lot better than you’d normally see in a film like this.