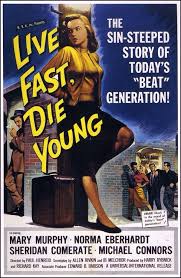 Wild and untamed youth of the 1950’s USA is the story in this movie about young Jill Winters, Norma Eberhardt, who leaves home and school for the big time in a life of petty crime. That lifestyle leads to her hooking up with a gang of mail and jewel thieves who plan to knock off the local post office of a package that contains $150,000.00 in diamonds.

Jill started out rolling costumers in bars all along the California coast after getting them drunk. Jill has the customers buy her as well as themselves drinks, thinking that she’ll go to bed with them, and then taking their money. In one case their car Jill ends up fencing some jewelry that she took off one of her victims and the fence tells her that she can get a job working with a gang of crooks led by Rick & Artie, Mike Connors & Troy Donahue. The two hoods specialize in stolen jewelry and electrical equipment selling the items to an eager public for a steep discount.

Arti and Jill get themselves jobs as Christmas help at the local post office where they can disarm the security alarm. Rick is later to barge in at closing time to rob the place of a package of $150,000.00 in diamonds thats being sent to that facility as registered mail. Meanwhile Jill’s older sister Kim, Mary Murphy, leaves her drunken dad Pop Winters, Gordon Jones, behind and goes out looking for her little sister before she ends up in the clink or even worse.

Finding where Jill is with the help of a kindly and handsome truck driver Jerry, Sheridan Comerate, who earlier in the movie gave Jill a lift Kim finds her way to the town where Jill is staying at. Kim then together with Jill and Artie gets a job at the local post office for Christmas not to rob the place but to prevent her kid sister from doing it and ending up in a federal jail with a long prison sentence.

Decent story about restless youth in the 1950’s America with Mary Murphy really good as Kim who has to deal with an unemployed and drunken father as well as a unstable and disturbed younger sister. All his while working six days a week as a waitress to put food on the table and beer in the fridge as the only bread winner in the family. Kim also has a phobia about men since one of her dad’s drunken friends tried to put his hands on her when she was a teenager. It was her experience with the kindly and feeling Jerry that cured her of that fear.

At the end of the movie Jill is given a suspended sentence by the judge for the attempted robbery of the post office, which Kim prevent her as well as Rick and Artie of doing. We then see Kim and Jerry leave the courthouse hand in hand where now all three, Jill Kim & Jerry, can now new start a new life and forget about the past.