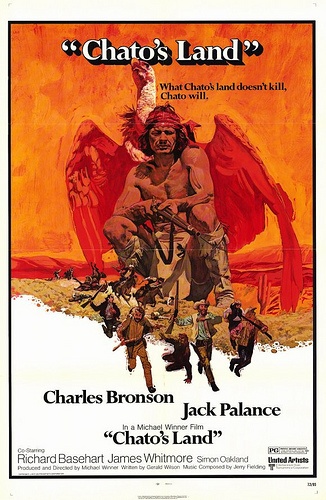 Released in 1972, “Chato’s Land” is typically written off as lame Spaghetti Western with Charles Bronson but, actually, it’s a UK production shot in Spain, Mexico and Arizona. And, secondly, there’s more depth here than the one-dimensional racist-revenge plot might first lead you to believe.

I’ll admit that I was turned off to this movie for years due to Brian Garfield’s scathing review in his excellent book “Western Films,” where he called it “cheesy, dreary, phony,” but an open-minded and honest viewing proves him wrong. Yes, it’s dreary, but it’s not cheesy or phony. It’s true that the desolate Spanish locations are phony, in that it’s not the American Southwest, but other than that the characters and dialogue ring true.

The plot is simple: Chato, a half-breed Indian (Charles Bronson), shoots an arrogant, racist lawman in a saloon and a large posse is assembled where they chase Chato in his own element, which is why it’s called “Chato’s Land.”

Bronson’s role is taciturn, one-dimensional and almost invisible, until the end where he’s a stunning example of masculine strength. Amazingly, Bronson was 50 years-old during filming, but he was in prime physical condition with not an iota of fat. Another reviewer commented that, if he were 6’5″, he would’ve made a perfect Conan the Barbarian.

Bronson’s striking presence and solemn performance is key to the success of the movie, of course, but the film’s true strength is the writing/directing and the stellar cast that make up the posse, including Jack Palance, Richard Basehart, James Whitmore, Simon Oakland, Ralph Waite, Richard Jordan and more. The group dynamics of the posse and their interplay is where the film shines. Four or five of the men are good men, but they’re too blinded by cultural bigotry toward a half-breed to realize the injustice of their cause. It never occurs to them that Chato has rights and that the slain lawman was in the wrong. All they focus on is that a sheriff is dead and a half-breed did it. Most of the rest of the posse are unlikable or repugnant, particularly a character played by Richard Jordan and his father, played by Simon Oakland.

Due to their differences, the loosely put-together posse lacks solidarity. Some are hell-bent on apprehending or killing Chato while others are rather half-hearted on the issue, pretty much just doing a favor for the former Confederate Captain, played by Palance. You have to listen closely because sometimes the dialogue isn’t too clear, but the quality writing brings these characters to life.

Why does Chato become increasingly merciless as the story progresses? At first, he does things to simply deter the group and provoke them to give up, like destroy their water supply, but at a certain point some of the members of the posse cross the line and do something particularly heinous, not to mention utterly criminal, proving that they are the true criminals and not Chato. Some of the members object, which is respectable, but not enough to stop the atrocities and so they become guilty by association. It’s called cowardly condoning.

As for the slightly ambiguous ending, what’s the point? Chato need not kill when Chato’s land will do it for him. That’s why it’s called “Chato’s Land.”