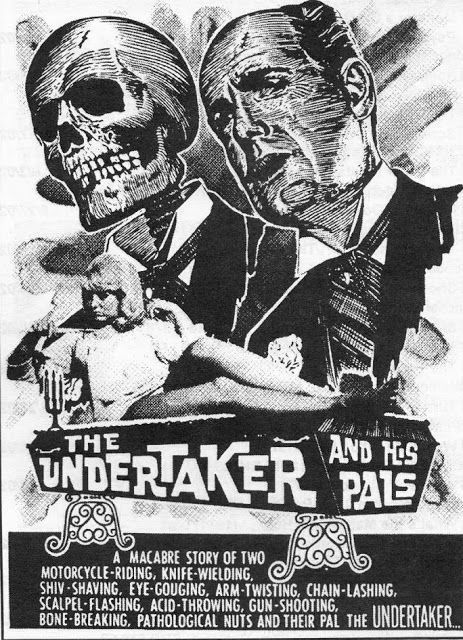 Therein lies a real social-historical problem: how can the film effectively creating the genre at the same time parody the genre, which doesn’t come into existence until the film is released? First, a qualification: What makes a slasher film is extremely graphic gratuitous violence against helpless women, using a long knife as preferred weapon.

Arguably, the real “first” of the genre may have been “Psycho”; but “Psycho” was an exceptional film, and stands out from most of the rest of the genre. And it’s in black & white, while a true slasher film requires blood-glaring color (which “Undertaker” has, and remarkably well-kept for its age). I prefer to think of “Psycho” as a precursor.

But “Undertaker” is, first of all, nothing special as a film. (It’s just low-budget drive-in fodder, intended to be ignored by the teen-agers necking in the back seat.) Secondly, it takes sadistic-voyeur pleasure in showing us the violence and the blood. Finally, it shows self-consciousness concerning the sadistic-voyeurism, meaning that it is intended to appeal to the very worst instincts in its target audience.

And that makes it pure genre film – well, almost.

As I said, it is also a parody of this genre – in the most outrageous way. The sales pitch the undertaker offers potential customers is genuinely amusing, and the killers repeatedly debunk themselves as silly mad-scientist types that only happen to run a failing diner. What’s going on here? There can be only one answer, logically: the film-makers here are actually parodying another genre film.

Perhaps “Psycho” can help us out here, after all. It must be remembered that a major influence on Hitchcock’s’s film was the motel sequence in Orson Welles’ “Touch of Evil”. That episode was itself influenced by the ’50s “JD” (juvenile delinquent) films that frequently had middle-class suburban families found suddenly in the grip of a punk or a gang of young punks (the most famous being Brando’s “The Wild One”). And the JD film was itself a clear off-shoot from the standard B-movie crime-thriller of the early ’50s, which is simply a sub-genre of the “police procedural” (e.g., “Dragnet”).

So, what “Undertaker” is really spoofing here is the police procedural.

So the indirect progenitor of the slasher film is – Jack Webb’s “Dragnet”. That’s a little unsettling, but true.

At any rate, I’m not a big fan of slasher films, and I only watched this film a second time because it is, so clearly, an historical oddity. And it’s real weird that directors like Welles and Webb (who have nothing else in common but this) should, in trying to explore the social significance of socio-pathic crime, point the way for audiences to enjoy such violence voyeuristically in the slasher film. That’s cause for reflection.

Which makes “Undertaker”, if only for history’s sake, a very, very weird little film.