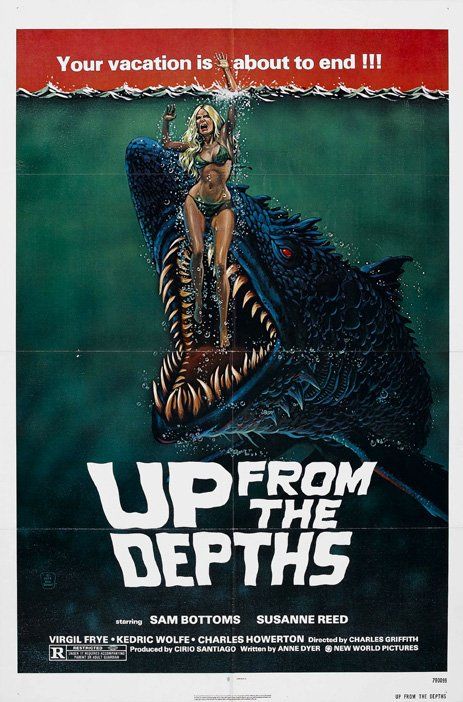 After reading about this film for years in magazines and reference books, I finally managed to track down it down some time ago at a local Blockbusters. I honestly didn’t expect it to be good, but I had no idea how truly terrible it would turn out to be. There are a whole bunch of Jaws inspired cash ins out there for your perusal, the original Pirahna being the best, Up From The Depths being the absolute worst. What really gives this film it’s claim to infamy is the astonoshingly bad comedy relief that pops up in the last half as all the goofy tourists head out to catch the killer fish. It’s so bad that it actualy makes the work of Jim Carey and Adam Sandler look inspired. No mean feat to be sure. The great poster for the film gives you the impression that the creature will be an aquatic dinosaur or sea serpent. No such luck as all it is, is some kind of rare, deep sea fish brought to the upper surface via seismic activity. It’s also not very impressive looking and the FX artist who created it regreted (years later in an interview in Fangoria) not having a good enough budget to craft a decent looking creature. One funny thing about the monster fish is that it shares a power that many other type of similar B movie monsters have, namely the ability to sneak right up on people despite being about 20 to 30 feet long. How do they do that? A week before NBC unveiled their terrible adaptation of Peter Benchly’s “Beast,” a local channel had the bright idea to air Up From The Depths. It’s a tough call as to which is worse but I feel that “Up” gets the nod. File it under, “How not to do a Jaws cash in.”