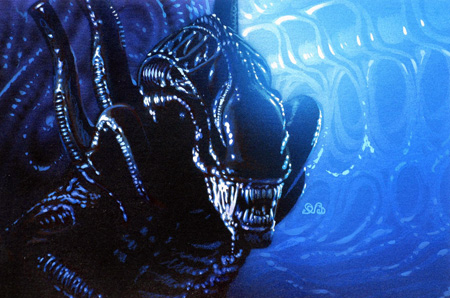 The debate as to whether or not director Ridley Scott’s “Prometheus” is a full-on prequel to his 1979 sci-fi horror masterpiece “Alien” has made its way through the cultural echo chamber on a scale not scene since “Did OJ do it?”

So, in an effort to serve you all, we’re daring to answer that question, once and for all.

Sir Ridley has been adamant that while it “carries the DNA” of “Alien,” it is its own deal, an original piece of science fiction that delves into everything from biotechnology to artificial intelligence to the origins (and possible destruction) of mankind itself. Those are lofty goals for a summer movie about the title spaceship star trekking to a hostile planet, but we’re gonna walk you through the evidence that this is indeed an “Alien” prequel no matter how look at it.

Fox
Logos and Music
The first thing we noticed from the movie’s initial teaser trailer is the “Prometheus” logo, prominently placed in the foreground of its collage of sci-fi awesomeness. It reveals itself one piece at a time in precisely the same deliberate hieroglyphic-style manner as the “Alien” opening credits did. You can hear echoes of eerie alarm sound effects used in the original movie as well.

According to Bleeding Cool, select pieces of Jerry Goldsmith’s original 1979 score will be used in the film, which they believe is already incorporated into the recently dished-out soundtrack listing on Amazon. Other intriguing track titles on the album include “Infected,” “Hammerpede” (whoa, what the hell?), “Space Jockey” and “Birth.”

Fox
Peter Weyland
When we recently viewed a 15-minute preview of the film at Fox in glorious 3-D (seriously, all three dimensions rocked our socks off), one key sequence we witnessed involved Guy Pearce under mounds of old age makeup as multibillionaire Peter Weyland.

Who’s this Weyland guy? Only THE major lynch pin that holds the whole bleedin’ “Alien” universe together!

Weyland-Yutani is the greedy corporation that sends the doomed Nostromo crew out to fetch the acidic starbeast in the original, and always had designs on capturing, taming and weaponizing ol’ chompers, much to Ripley’s disapproval.

Peter Weyland and his deep pockets are what kickstart the voyage of the Prometheus, but it’s Charlize Theron’s corporate viper Meredith Vickers that deals out the villainous beancounting which jeopardizes everyone on board. Oh, and the entire human race.

Weyland also kicked off the viral marketing campaign for the film, with a younger Pearce starring in a fake Ted Talk from 2023, wherein he oozes charisma and sleazebaggery simultaneously whilst relating the myth of Greek titan Prometheus, who stole fire from Zeus and tossed it to us humans.

Some other familiar tech from James Cameron’s “Aliens” can be glimpsed at the Easter egg-loaded Weyland Industries homepage, including a “Storm Rifle” — an early version of the Colonial Marines’ Pulse Rifle — and the awesome Power Loader that Sigourney Weaver fights the Alien Queen with. Perhaps these items are just thrown onto the site as fan service, but we pray to Nerd Jesus they wind up in the film somehow.

A similar wealthy industrialist figurehead was previously played by Lance Henriksen as Charles Bishop Weyland for the craptacular, non-canon “Alien Vs. Predator” in 2004. Now, who the Yutani is in Weyland-Yutani may still be a mystery worth exploring.

“The Prometheus is owned by an entrepreneur called Peter Weyland, and is played by Guy Pearce,” says Scott. “That’s the connection between the two films, and nothing more. ‘Prometheus’ is a new film, a new world, and is full of new ideas. And of course new monsters as well.”

There might be some new oogie boogies in there, Ridley, but there’s mos def a few more connections to sort through, including …

Fox
David
From that icy synthetic voice to the milky blood in his veins, Michael Fassbender’s David is every bit as beguiling and potentially threatening a corporate tool as his predecessors, Ash (Ian Holm) in “Alien,” Bishop (Lance Henriksen) in “Aliens” and Call (Winona Ryder) in “Alien Resurrection.” He even follows those movies’ android naming scheme: A, B, C, D.

A chilling, Apple-esque viral promo ad from “Weyland Industries” was released featuring Fassbender addressing the camera as he simulates various emotional states, including crying. Supposedly Fassbender also used Scott’s “Blade Runner” Replicants as a frame of reference for his soul-bot performance, as well as Olympic diver Greg Louganis. David functions as housesitter for the Prometheus while the crew is in hyper sleep, but even though he is made to serve man he just might develop his own artificially intelligent agenda.

The Derelict Ship
Inside a Pyramid on the alien world the crew visits is the Juggernaut, an enormous crescent-shaped spacecraft that, after some CGI razzle dazzle, will appear onscreen as enormous as the Empire State building.

Fans of the first film recognized this immediately as the derelict spacecraft with vagina-shaped entryways the Nostromo crew explored in the original 1979 movie. Designed by Swiss evil genius artist H.R. Giger, the ship also made its way into the director’s cut of 1986’s “Aliens” when Newt and her family stumble on a facehugger and wind up infecting a whole colony with Alienitus.

Spoilers be damned, Fox has chosen to feature money shots in the trailer of the Juggernaut goin’ down in a big explosion that sends it hurtling back to the planet’s surface, so we can pretty much guarantee that no matter what happens to Elizabeth Shaw (Noomi Rapace) or any of her teammates, they will leave this ship as derelict as Ripley and company found it.

Who is inside that ship and why they’re heading to Earth is another question, but we know at least one of them is…

The Space Jockey
Along with the above alien ship, this big creep is also the biggest bullseye in the “Is it or isn’t it an ‘Alien’ prequel?” derby.

Straight from the original film, where he sat in his chair lifeless as a statue with his ribcage burst open from the inside, the man affectionately known in geek circles as The Space Jockey is seen bright-as-day in the new trailer strapping into his chair/final resting place. We will finally figure out who he is and what came out of him, though images seem to indicate that it might merely be a suit or shell concealing an even more ominous figure.

Xenomorphs?
This is the biggest question mark of this whole enterprise, whether or not they’ll roll out the red carpet for the iconic beasties that put the “Alien” in the “Alien” franchise?

“No. Absolutely not,” Scott told Dark Horizons emphatically. “They squeezed it dry. He (the Xenomorph) did very well. He survived, he’s now in Disneyland in Orlando, and no way am I going back there. How did he end up in Disneyland? I saw him in Disneyland, Jesus Christ!”.

H.R. Giger’s terrifyingly phallic creature is indeed an animatronic fixture for children to enjoy at Disneyworld’s MGM tour, and it’s true that Fox basically strip-mined any last ounces of terror or enjoyment we could glean from it with the “AVP” movies.

But as far back as early last year Sky Movies were reporting that there would be plentiful Xenomorph action, and the rumors still persist.

Scott also confirmed that original “Alien” designer H.R. Giger is “doing a little bit of work for me. He’s been doing some murals, big murals, which we’ll see in almost one of the first chambers we encounter when we land where we’re gonna go.”

“We present the evolution of these nasty bits and pieces of creature evolution in a logical and biological fashion,” says Scott in the press notes. Adds Special Make-Up Effects artist Neal Scanlan: “Each stage of a creature’s life cycle has a distinctive purpose. For our xenobiology, we brought in new elements that are not necessarily backward from those in Alien, but are of a similar DNA. Many of Ridley’s references are derived from nature – plants, vegetables, sea creatures and other animals. Nothing is invented.”

In a “Paul is dead” moment, Fox released a scary chunk of audio (via Bleeding Cool) which, when played backwards, reveals what sounds like one truly demonic medical operation. There’s a lot of flappy, squishy sounds and some dude screaming “Cut it off, cut it off, cut it off!” and “You’re making it worse, it’s tightening, it’s breaking my arm!”

From the sounds of it, this might just be scary enough to have the impact of the original’s legendary “chestburster” scene.

VIEW GALLERY »
So Is It An ‘Alien’ Prequel Or What?
Duh. No need for a debate. No need to bring in Perry Mason. This case is closed.

Well, it basically is. Having not seen the whole enchilada yet we must confess that Mr. Scott and his screenwriting cohorts Jon Spaihts and Damon Lindelof may have built in a few booby traps that sling curveballs which detour wildly from the “Alien” mythology. That is, after all, what makes “Prometheus” so much more enticing than your average prequel: the glimmer of a truly original summer blockbuster.

So spring that trap, fellas, and give us the thrill of the unexpected once again. Our chests are bursting with anticipation.