Friday night “The Devil’s Carnival” came to the Colonial Theatre for a sold-out night of sin and debauchery.

The Sacramento stop on the tour of the newest short feature from the creators of “Repo! The Genetic Opera,” proved to be just as musically and aesthetically pleasing as the trailers promised.

The film tells the tale of three souls who get sent to the Devil’s carnival to fend for themselves. On their adventures, they each meet a collection of humorous, spooky and entertaining characters played by a range of different rock musicians and well-known B-movie actors.

Hosted by Sacramento’s own Stephanie Hyden, star of many local trash films, and sponsored by The Sacramento Horror Film Festival, the night kicked off with a dance performance by Jeslen Mishelle with Mr. Dagger. Mishelle emerged on stage in a typical carnival, burlesque ensemble atop a pair of stilts. She danced to a few different songs and was eventually joined by Mr. Dagger, who coerced Mishelle into stripping down to just a pair of panties and pasties in typical burlesque fashion.

Knowing that many of the people in attendance were “Repo!” fans, the “Carnival” team prepared a pre-film behind the scenes short on the creation of “Repo! The Genetic Opera.” Fans were treated to footage of their favorite “Repo!” characters preparing for scenes and goofing around on set.

Victorian Goth musician Emilie Autumn, who plays the Painted Doll in the film, was overjoyed to judge a costume contest. Because fans of “Repo!” and “The Devil’s Carnival” are not shy and definitely very good at dressing up, it was a tough choice for Autumn to pick a winner. However, in the end, a gentleman dressed up as The Devil from the film won over the crowd and Autumn with his giant horns and red face paint.

“The Devil’s Carnival” film itself was worth waiting for. Terrance Zdunich, who plays the Devil in the film and also wrote the feature, was in attendance, along with Darren Lynn Bousman, who directed not only “The Devil’s Carnival” and “Repo! The Genetic Opera,” but also a handful of the “Saw” series as well. 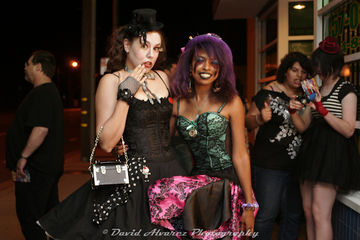 Staying true to the spirit of how Bousman believes movies “are supposed to be watched,” fans cheered, screamed and called out humorous things as the film played, making for a more interactive movie-watching experience. The Devil himself seemed to get the loudest cheers, with Autumn following closely behind.

Directly following the movie, Bousman, Zdunich, Autumn and Joseph Bishara, music producer of the film, took the stage and hosted a Q&A session that lasted approximately 20 minutes. Humble, yet still commanding, they all explained how the movie came to be and that this was just the first in a series of films to revolve around the topic of heaven versus hell.

Packed full of unique characters, a creative storyline that allows for future episodes, and a score that can hold its own next to gems such as “The Rocky Horror Picture Show,” “The Devil’s Carnival” did not disappoint a theater full of raucous fans.