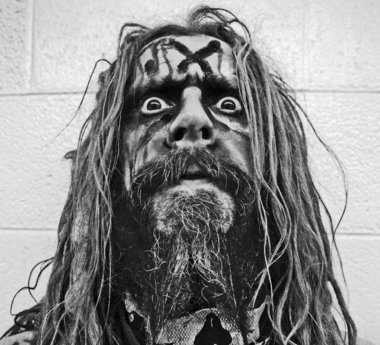 Rob Zombie is one of heavy metal’s true Renaissance men.
He’s widely recognized as the dreadlocked, platform-booted former lead singer of White Zombie, and now the frontman of his solo band, currently in its 14th year. He’s also a visual artist, in two different mediums: Most notably, a film director, having helmed “House of 1000 Corpses” and two “Halloween” remakes in his horror oeuvre, along with several mainstream TV commercials. He also designs all the album artwork for his music projects (and famously designed the set of MTV’s “Headbanger’s Ball” in the early 1990s).
Right now, as Zombie’s band – featuring bassist Piggy D., guitarist John 5 and drummer Ginger Fish – stomps through two weeks’ worth of tour dates co-headlining with Megadeth, he has major film and music projects on the front burner. His next horror film, “The Lords of Salem,” which he wrote and directed, is in post-production, and will tentatively be released later this year. And he has studio time booked starting June 1 for his next album, the follow-up to 2010’s “Hellbilly Deluxe 2.”
IF YOU GO
Rob Zombie and Megadeth
When: 6 p.m. Friday
Where: The DeltaPlex, 2500 Turner Ave. NW
Tickets: $39.50 and $49.50 at the DeltaPlex box office or etix.com
Opening act: Lacuna Coil

Info.: deltaplex.com, 364-9000
I caught up with Zombie prior to the tour, just after horror-comedy “The Cabin in the Woods” opened, and created a buzz among movie buffs for deconstructing the genre with tongue firmly in cheek. The interview started off with a couple of gruff, prickly responses – although there’s a kitsch element to his films and music, he doesn’t dig on horror that makes you go ha ha – but quickly righted itself as he discussed the touring-recording cycle, “Lords of Salem,” directing TV commercials and infamous B-movie actor Clint Howard.
Have you seen “The Cabin in the Woods” yet?
No. “Scream” made me want to rip my eyes out. Horror and comedy don’t go together very well.
You don’t even want to see it out of curiosity?
It’s not my type of thing.
You’re touring now and putting out a new album later this year. Isn’t that backwards?
The world is such a big place, you can never get everywhere you want to go (on tour). My concept is to put together a new album if it means something, not just as an excuse to tour. If you’ve been around for a while like I have, it doesn’t mean as much to do album-tour, album-tour. I do like the idea of touring first – we get our chops back into shape, and work the kinks out.
So what’s the status of “Lords of Salem”?
I’m still finishing it. We’re done editing, and I keep tweaking little things on it. This week, we’re mixing the sound. It’ll probably be out in late 2012.
Is it a small-budget movie?
Truthfully, it’s probably the biggest movie I’ve done yet. It’s more elaborate…it’s a much grander film. It’s less down-and-dirty than my other movies.
How it is grander and more elaborate?
The look of it. The way we shot it, stylistically. The other movies were mostly handheld (cameras). This is more of a Kubrick style movie, with big sweeping shots and a bigger look. We used multiple locations, and flip-flopped across the country to shoot it.
Was it important for you to do something different this time?
I think so. It’s good to break away. If you go down the same path, you get burned out. You have a bag of tricks, and it’s so easy to fall back on, and you can do it with your eyes closed. It’s the same thing with writing songs.
I’ve seen a few of the still photos from “Salem” in videos and on your website, and they’re bizarre and compelling. I want to see more.
A lot of people don’t know much about it, and I’m purposely trying to do that. With “Halloween,” it didn’t matter, because you already know the story. But this one, you don’t want to give too much away. I screened it for a few people recently and they were like, “Holy (expletive)!” They weren’t ready for what they were going to see. Going to the movies will never be like that again. I still remember seeing “Jaws” and “Star Wars” and “Close Encounters of the Third Kind,” and I didn’t know a thing about them, and was blown away. That’s the best way to see a movie.

Do you prefer to direct your own scripts as opposed to someone else’s work or a remake?
I prefer original material. You can do good remakes, but the better ones are of more obscure films. Remakes used to be a cooler thing, and I enjoyed making the “Halloween” movies, but now there are too many of them; the same thing happened 20, 25 years ago when everything was a sequel. There’s very little original material anymore. I’d always rather see something new.
Only you would cast Clint Howard in a TV commercial, it seems.

I’ve been friends with him for a little while now. (Note: Howard starred in Zombie films “House of 1000 Corpses” and “Halloween,” and was a voice actor in animated movie “The Haunted World of El Superbeasto.”) I met with the ad agency for the Ambo Ant Block commercial and they said, “That sounds like Clint Howard, can we cast someone like him?” And I said, “Why don’t we get Clint himself?” So I called him up and he said, “Aw, yeah, sure, sure, I’ll be right there!”

Do you enjoy directing TV commercials? It seems like they’re more of an art form lately.
Almost every director shoots TV commercials, but they just don’t talk about it. I like it because I’m still directing, and still creative, and not getting tied up for a year at a time (on one project). You work on it for a week, and you’re done. You don’t get to direct very many movies, because it takes two years out of your life.