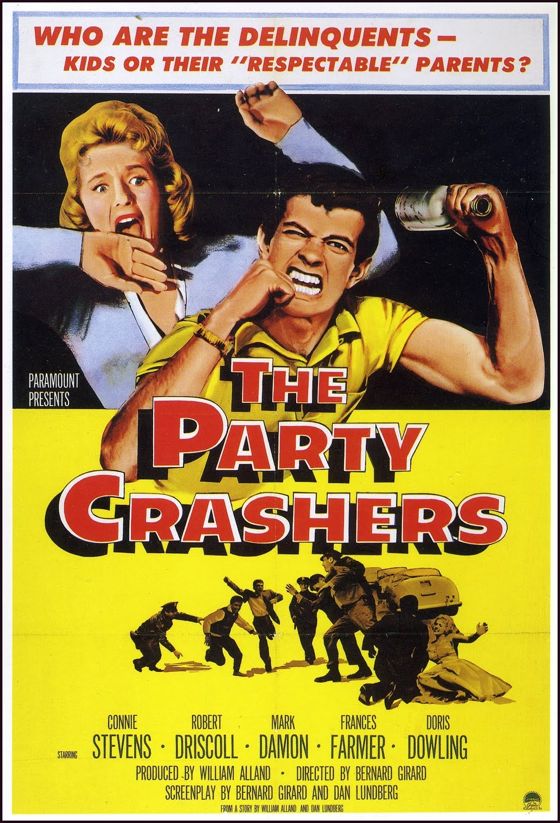 “The Party Crashers” doesn’t waste a lot of time on drag races or fights and romance at the soda fountain or even teen rebellion, though these are certainly elements. It’s an intergenerational semi-horror tale, that focuses its outrage on that era’s older generation and carries this into the realm of the diabolical. The teens in this aren’t very nice, but their parents and the rest of the suburban neo-affluent, post-war 30s to 50s crowd are a hell of a lot more scary.

The main young delinquent is played by handsome young Mark Damon, a charismatic young thug who leads fellow bored teens into the title weekend pastime, that of invading teen parties around the city and turning them into orgies of violence and vandalism. At his opening conquest, he captures the romantic interest of a good-girl-itching-to-go-bad, played by gorgeous young Connie Stevens. Connie uses emotional blackmail to drag along her square and decent boyfriend (the legendary ill-fated child star Bobby Driscoll, in his last role before wandering off to an early heroin death in an abandoned NYC tenement) into Mark’s whirlwind of crazy kicks.

Along the way we get to know these kids’ parents. Connie’s a confused spoiled brat, with an indulgent but ineffectual father and a successful writer mother completely obsessed with her own career. Bobby’s parents are kindly but socially clueless — post-lobotomy Francis Farmer, also in her last role, plays his mother and there’s a quiet poignancy to the scenes these two lost and tragic actors play together, that is downright heartbreaking. Then there’s Mark and his home life, and suddenly we’re more than aware of what has turned this kid into the monster he is. His father is a staggering drunk, drowning beneath the contempt of both his damaged son and evil wife (Doris Dowling, in the performance of her career), a hedonistic shrew who is both verbally and physically abusive, and explicitly exhibits incestuous yearnings. (You will truly not BELIEVE that this film was made, and released, in 1958!)

Though the film ends on a rather twee note that reflects the 1950s cautious obsession of playing to the censors, the final third leading up to it is freaky and ahead of its time. Mark, who has used his charms to entrap Connie and Bobby into his seductive delinquent thrill ride, picks the wrong party to crash, with horrific results.

On that (unrevealed) note, the film has a lot more in common with 1966’s “The Chase”, with its air of drunken angry “lost youth” hysteria, than the actual “angry youth” drive-in flicks of its period, and no wonder it’s forgotten. 50s kids, to whom this film was marketed, preferred the focus to be on themselves, no matter how much they were demonized. “The Party Crashers” is a coldly adult movie, with its juvenile delinquency being matter of social cause and effect, rather than angry free choice on the teen’s part, and that was likely a little bitter of a pill to swallow.