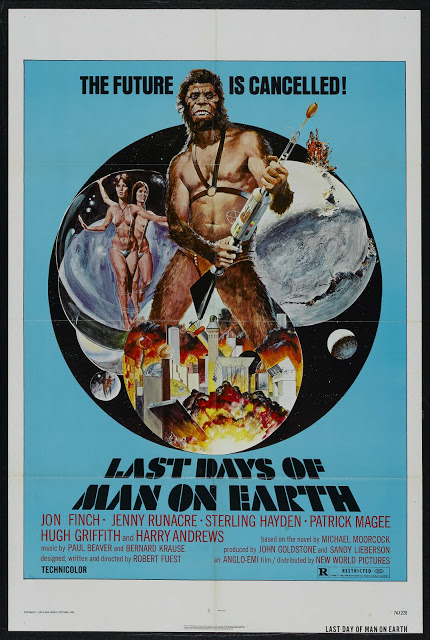 An ambiguous adventurer becomes involved with an experiment designed to overcome the impending extinction of the human species. One from the “What were they thinking?!” school of film-making: much like John Boorman’s contemporaneous ZARDOZ (1974), this is yet another good-looking but uncontrolled attempt at a ‘trippy’ post-apocalyptic scenario that ends up being embarrassingly campy – and, here, wasting a fine veteran cast (Sterling Hayden, Patrick Magee, George Coulouris, Harry Andrews and Hugh Griffith) into the bargain – none of whom appear in any scenes together. The main role of Jerry Cornelius had been offered to Mick Jagger (who rejected the script as “too weird”!) and Timothy Dalton before Jon Finch stepped in and basically stopped his promising film career dead in its tracks; in hindsight, it is understandable not only that novelist Michael Moorcock hated this adaptation but also that his prolific literary creation never returned in any further cinematic adventure since! For the record, the supporting cast also features Jenny Runacre (as Cornelius’ supremely annoying androgynous acolyte), Graham Crowden, Ronald Lacey, Sarah Douglas and Julie Ege…but every earnest effort on anybody’s part is stifled by the film’s relentless visual and aural assault on the viewers’ senses. Interestingly, the former is reminiscent of A CLOCKWORK ORANGE (1971) and the latter features Eric Clapton among the session musicians! When Roger Corman picked up the film for U.S. distribution, he not only trimmed it by 11 minutes but also retitled it as LAST DAYS OF MAN ON EARTH to (reportedly) little effect.