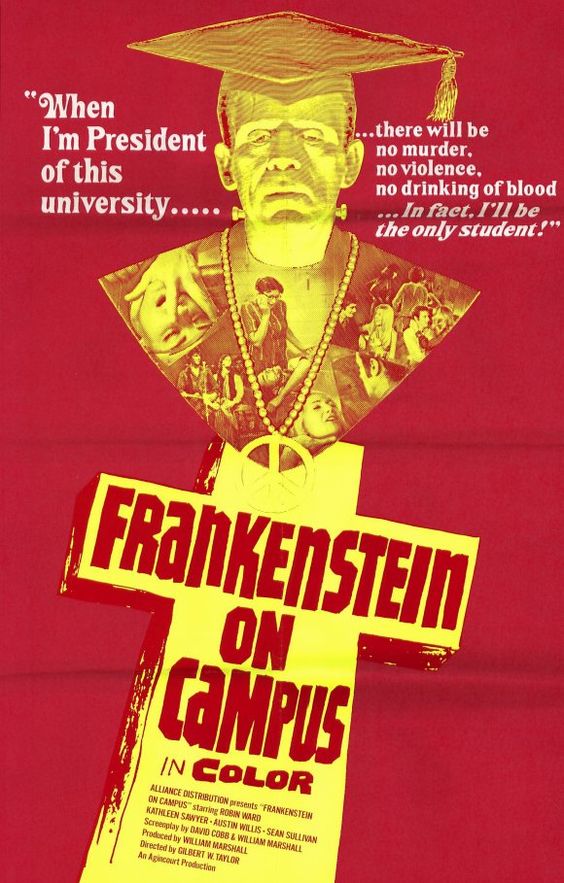 A largely forgotten little Canadian film, and definitely a product of its era, FLICK/DR. FRANKENSTEIN ON CAMPUS is a ‘turned-on’ sexploitation/horror/counterculture oddity which is often referred to as “one of the worst ever” by people who most likely haven’t seen it. Truth is, it’s not nearly as bad as legend illustrates, but it does have a frustrating self-composure uncommon to the praxis of sex-infused horror cinema, and therefor comes off feeling somewhat like a chaperoned date.

Formulaic Frankenstein jive personifies our ubiquitous mad doctor as a young med school student. Not surprisingly, he’s been up to the usual diabolical scientific avocations, and finds trouble with the school faculty who ultimately expel him. Wonted chaos and killing result, but only when the film manages to take a few breathers between softy sex scenes.

This is an amusing time-capsule for its admixture of B-horror, go-go club psychedelia, and campus socio-political activism. Centrally, however, FLICK is a rather overdressed and by-the-rules project, which may be why it has never galvanized some sort of cult fan-base. Commensurate production values and an attractive cast certainly don’t hurt matters, and while its not exactly a winner, it might be agreeable fodder for archaeologists of the ultra-obscure.