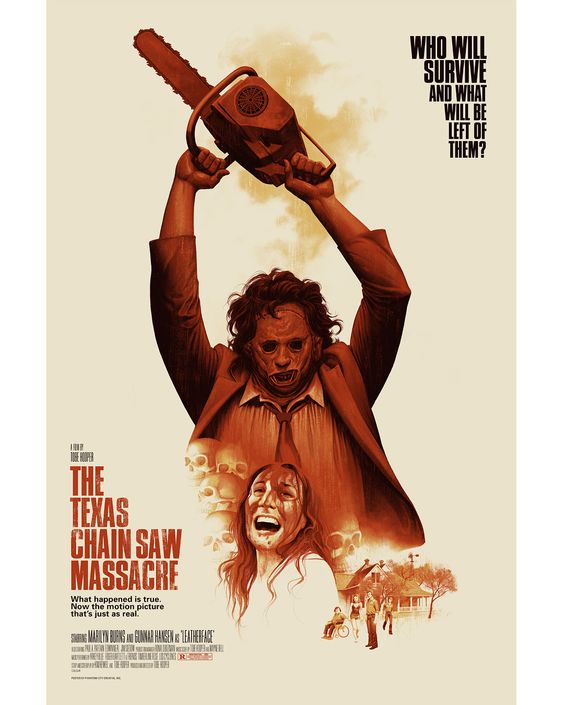 Who knows out of what strange game of fate or as if the universe conspired upon its creation and everything that came to pass did so that Tobe Hooper would make The Texas Chainsaw Massacre. Like a blood spattered, low-budget Orson Welles of 70’s exploitation, the immensity of his debut will forever haunt him and his career.

The task of committing TCM to words is a difficult one, not because the proper words don’t exist but merely because they can only describe the surface and never convey the essence and the heart and what can only be felt in one’s own skin and maybe that of others. Sounds of animals and howling of beasts and the clanking of rustling metal speak TCM’s language. The dissonant chord that sounds in the soundtrack as the movie fades from black to flashes of decaying flesh is TCM’s lingo and what defines it is disorientation.

Indeed the first shot proper that opens the movie, that of a rotten head and as the camera zooms out we see the whole dead body in a grotuesque posture like some sort of zombified jester sitting atop a gravestone, offers no clue and safe grip for the viewer. After the opening credits roll, we are served an orange sun burning in a blackened sky and that dissolves into the image of a dead armadillo laying on the street. We’re 5 minutes into the movie and we’re provided no clues of typical genre orientation, no protagonists of any sort. As the eye scans the image for something to cling to, narrative or otherwise, there’s nothing there save for decay and death.

And then TCM starts rolling and picks up steam and never stops. Apart from how original or not the concept is (crazed backwoods family terrorizing city kids) it’s the approach that makes all the difference. Hooper achieves sensory terror and doom by piling on images and sounds, each of them spilling to the next frame starting an avalanche of horror. A close shot of cattles as the van drives in the background, a seedy gas station, a crazed hitch-hiker the kids pick up, an abandoned house. In the interior shots of the abandoned house the blacks are crushed and we only see silhouettes moving against the textures in the walls and those are juxtaposed with exterior shots where the whites wash out, like some kind of rural hell, a land of some other order that is coming apart under the weight of its own abandonment.

Even when the sensory chaos is broken for a while so that our genre expectations can be fulfilled as the crippled guy Franklin mutters to a couple that leaves the abandoned house to make out “Yeah, see you in an hour or so” (followed by a drone in the score) and we just know he’s never gonna see them again, a typically ominous foreshadowing common in slashers, that only lasts for seconds. Then Hooper cuts back to puzzling images, feathers on the ground and some kind of dreamcatcher made of bone (?) and weird buzzing sounds in the score, like otherwordly insects flying unseen. TCM constantly tips its own axis, content to be left out of balance.

The first encounter with notorious chainsaw-wielding Leatherface is as disorienting as anything that comes before it. He appears out of nowhere like a beast in a frenzy and the carnage begins. And for a movie of TCM’s reputation there is surprisingly no (or at least little) explicit gore. Yet the violence is startling and raw as the images that preceed its outburst spill into it and add their own touch of the morbid. Eisenstein must have been clairvoyant when he spoke of how powerful montage can be.

We’re also given glimpses to Leatherface’s tortured, crazed soul, bits of characterization like a gesture and a look of his eyes. Not a psycho killer out of sadistic pleasure perhaps, he looks more like a savage beast defending its territory or a wild dog scared of intruders trespassing in his nest.

Like an avalanche of macabre images that is impossible to stop once it starts, TCM whizzes by in a manic pace. The chase scene where Leatherface hunts down Marilyn Burns, scared out of her wits and howling like a wounded animal, is shot through branches of trees, as if the landscape is conspiring to ensnare the victim and so hunter and hunted run in the fields and inside a house and then back outside while the titular chainsaw is buzzing away in a constant reminder of gruesome death. Even when Hooper overplays his hand (as in the dinner scene) it’s all done with deliberation that cannot be ignored, like maybe the director is as insane as the characters he’s depicting and he takes great pleasure in basking in their insanity.

TCM simply has to be experienced, no critical analysis can do it justice. Without bucketloads of gore, without the slick look of high budget, it remains one of the most bleak, atmospheric and aurally violent movies of all time. What happened to Tobe Hooper’s career after it is anyone’s guess, but TCM is good enough to top entire filmographies of other directors. It has been imitated countless times, remade and given sequels and prequels to, but there’s something primeval about the original that can’t be recaptured.