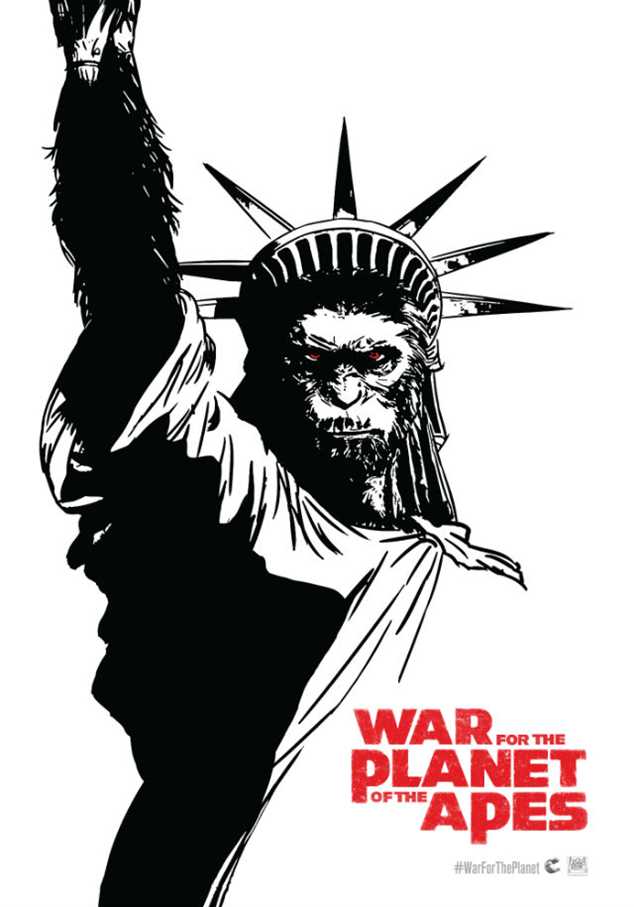 2011’s “Rise of the Planet of the Apes” was the one of the big movie surprises for me of that year. With staggeringly good mo-cap for the apes and a touching and memorable story it was for me was a 10* classic. 2014’s “Dawn of the Planet of the Apes” whilst also good took a slight backward step. With “War”, the form is back almost to top notch, and this is a summer release at last deserving of the suffix “blockbuster”.

We have moved a number of years forwards from the events of “Dawn” and society as we know it has crumbled away still further: even the “Holidays are Coming” Coke lorry is no longer in service, so things MUST be bad! We begin the film with the apes having a nice ‘Centre Parcs’ break when their reverie and cappuccinos are rudely interrupted by the attacking forces of “The Colonel” (Woody Harrelson, “Triple 9”, “Zombieland”). For The Colonel is intent on tracking down and killing ape-leader Caesar (Andy Serkis, “LOTR”).

After things get decidedly personal, Caesar leaves his young son Cornelius (in a nice nod to the Roddy McDowell role in the original films) to find and kill The Colonel. So follows a “True Grit” style pursuit/revenge chase, made more similar to this analogy by the picking up of a waif-like mute girl (the excellent Amiah Miller). I found this to be a really emotional plot line, with Caesar torn between the animal drive of his revenge and his role as a leader to his whole community.

The film analogies continue as we take in a “Shining”-style winter hotel; a gritty Prisoner-of-War camp escape drama (“The Great Esc- ape”?); a barricades battle in the style of Helm’s Deep in “LOTR: The Two Towers”; and a full-on Coppola-style helicopter-based war sequence (“Ape-ocalypse now”, as graffiti in the film declares).

Once again, the mo-cap ability to express true emotions on the faces of the apes is mind-blowing, with Serkis again being outstanding as is Steve Zahn (“Dallas Buyer’s Club”) adding some (very funny) comic relief as “Bad Ape”.

While Woody Harrelson is not everyone’s cup of tea (including mine), here I found him to be actually very good (“SO EMOTIONAL”!) as the half crazed dictator forcing beings he sees as less worthy than his kind to build a wall. (That’s just SO familiar… think dammit… think…!) There’s a really cool plot twist in The Colonel’s character arc that I really didn’t see coming. Just so cool.

Another star of the film for me was Michael Giacchino’s music which is simply awesome. Starting with a superbly retro rendition of the 20th Century Fox theme (not top of my list: “The Simpson’s Movie” still holds that spot for me!) Giacchino decorates every scene with great themes and like all great film music some of it you barely notice. A dramatic telling by the Colonel of his back-story is accompanied by sonorous music that is similar in its power to James Horner’s classic “Electronic Battlefield” in “Patriot Games”: only when the scene finishes and the music stops do you appreciate how central it was to the emotion of the scene.

The script by “Dawn” collaborators Mark Bomback and (director) Matt Reeves is eventful and packs a dramatic punch particularly in the last half of the film. The talented Mr Reeves (who also directed “Cloverfield” and “Let Me In” and is assigned to direct the next Ben Affleck outing as “The Batman”) directs with panache, never letting the foot come off the tension pedal.

On the downside, that “last half of the film” is still 70 minutes away, and whilst I appreciate a leisurely pace for properly setting characters and motivations in place, getting to those simply brilliant scenes set at “the border” is a bit of a slog that might have been tightened up and moved along a bit quicker. Also, while talking about editing, I would have personally ended the film about 90 seconds before they did.

I saw this in 3D, but the effects are subtle at best (although there is a nice binocular rangefinder view). In my opinion it’s not worth going out of your way to experience in 3D.

But overall I loved this movie. The film is chock full of visual delights for film lovers (one of my favourites being “Bedtime for Bonzo” – a nice historical film reference – written on the back of a soldier’s helmet). An epic action film with a strong emotional core to the story that genuinely moved me. There may be other spin-off Planet of the Apes films to follow. But if they left this here, as a near-perfect trilogy, that would be absolutely fine by me.