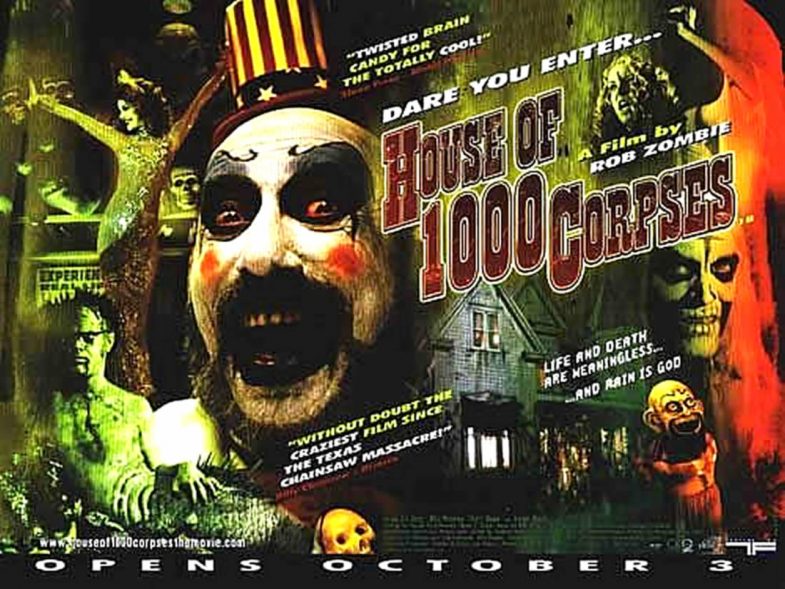 Writer/director Rob Zombie’s music has always had a kind of comic book/horror movie sensibility which he translates into his screen project, a tribute to the pioneering take-no-prisoners classics of the 1970’s like “The Hills Have Eyes” and “Texas Chainsaw Massacre,” in fact a prominent role is played by Bill Moseley of “TCM II.” We’re informed at the outset that it’s Halloween Eve 1977 in some one-horse town in an unspecified region of the country (which of course allows each actor to use any accent he or she likes, even within the same household). The chief attraction of this town seems to be a “horror museum” run by a Captain Spaulding (who bears no resemblance to Groucho Marx) played by veteran B-movie stalwart Sid Haig, whom I recall from way the hell back in “Busting” as the big menacing bald guy. He’s still big and bald but not so much menacing as jovially deranged with undercurrents of menace (and lots of make-up). After a delightfully overwritten robbery sequence involving a couple of local yokels, four fresh-faced young people with one foot in the grave show up at the museum, setting in motion a series of unpleasant events.

No particular reason to dwell on the plot, especially if you’ve seen “Texas Chainsaw Massacre” and/or it’s sequels. It’s the tried-and-true damsels (and their boyfriends) in distress. (We even get a pack of cheerleaders thrown in as a bonus. Apparently people have been going missing in this town but back in the Seventies the term “serial killer” was waiting to be invented, so no squads of Feds and profilers have arrived.) For movies like this to work, the actors have to be on the same page in tone; aside from Haig and Moseley I barely knew anyone except Walt Goggins from TV’s “The Shield” and of course Karen Black, whose performance is the only one that doesn’t quite click. It’s like she’s playing a whack job where the others are just being whack jobs. (But if they ever wanted to remake “Whatever Happened to Baby Jane,” there’s your girl!) In terms of direction, Zombie takes a kind of kitchen-sink approach; some of it reminded me of Oliver Stone’s “Natural Born Killers” and others of that ilk, with the eye-blink jumping to and from videotape, color variations, flashback and/or fantasy, etc. Some of the editing’s a little too jumbled in the modern trend of trying to obscure what’s happening, although not to the “Darkness Falls” degree of complete chaos. (I’m old-fashioned, I still think the best way to scare you with something in a movie is just train the camera on it so you can see it coming at you with no way to escape.) But Mr. Zombie has a nice feel for where to put the camera and how to move a scene along. Some of his sequences have a kind of sinister poetry to them, like when the two deputies go checking out the homestead from hell, the kind of setup we’ve seen in how many shlock items (I just saw one in a recent victim of the Mystery Science Theater 3000 crew) but in this case Zombie replaces all sound with a Slim Whitman tune (we recall how Whitman’s voice was enough to slay big-brained Martians a while back) and holds the final crane shot an audaciously long time. Then once the coffin gets lowered into the water towards the end, “House” kicks into overdrive and from then on if there’s nothing in the movie that spooks you, then maybe you’re unspookable. I know a lot of that imagery will be lingering with me for a while, such as Fish Boy…..