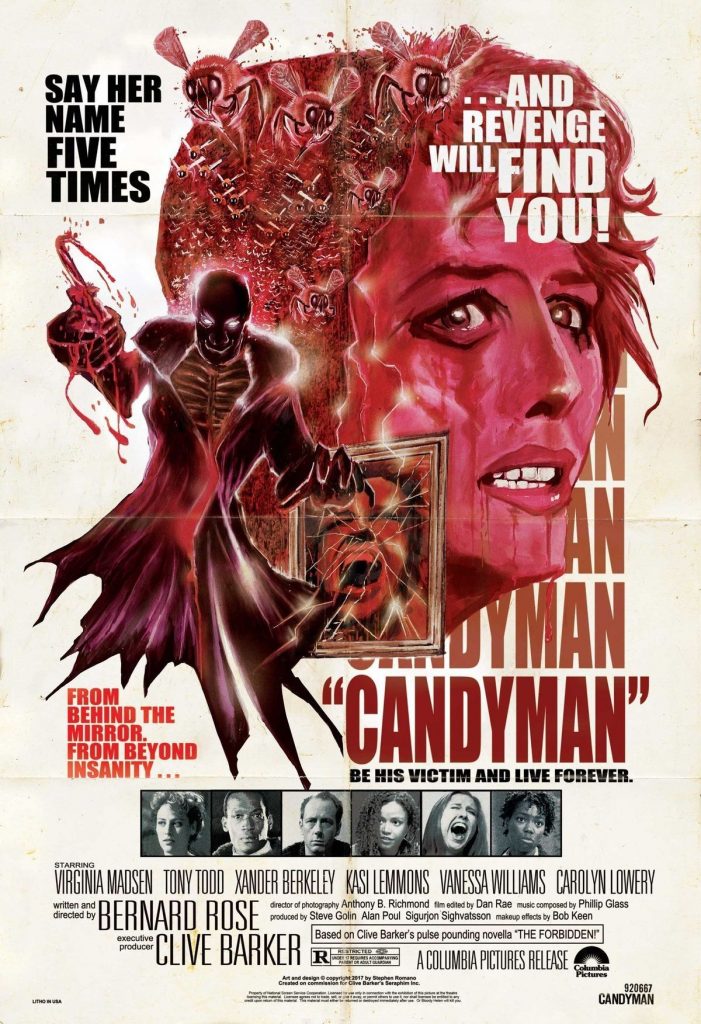 Candyman’ is a very frightening and yet intriguing and compelling movie that plays upon and cleverly manipulates old urban legends and myths of folklore and brings to life some of your worst nightmares and horrors. As far as scary movies go it falls into a category of its own in terms of its depth and excellence

One of the main strengths of this movie is that the script and the character performances are so powerful and credible that it doesn’t feel the need to inject unnecessary horror/graphic/violent scenes into it to sensationalize it. Sure, there is an extensive amount of blood and gore in the movie but it nevertheless fits in with the plot and isn’t added in just to give the film an unnecessary `horror’ feel. The chilling and terrifying aspects of this movie come from the dialogue, the sequence of events and the emotions and personas revealed in the characters. The plot and the script is enough to leave you mesmerized throughout the whole movie and to remain on the edge of your seat with the anticipation of what is going to happen next. The producers and scriptwriters must receive top marks for the wonderful way in which they enriched the whole movie by relying on the script and the acting instead of adding cheap gimmicks into it to make it more frightening. In addition to that the lighting and the scenery around the whole movie makes it even more frightening

I have always thought Virginia Madsen to be a highly talented, qualified and excellent actress whose wonderful acting and gifted performances have been consistently overlooked when allocating movie roles. For me `Candyman’ confirmed this thesis. Her portrayal of Helen Lyle is truly one of the most excellent portrayals of a character I have seen recently. She gives her character so much depth, dimension and genuine emotions. Tony Todd also emerges from this film as a very talented and wonderful actor. The amount of depth, dimension and persona that he gives to the character of the `Candyman’ is amazing. Although the Candyman is in many ways a truly evil and frightening character, you also can’t help but feel a great deal of sympathy for him at times and this too is a testament to Todd’s acting. The supporting cast particularly Vanessa Williams and even the young kid who Helen interviews while in the neighbourhood-also deserve an honourable mention for giving their characters such a realistic edge.