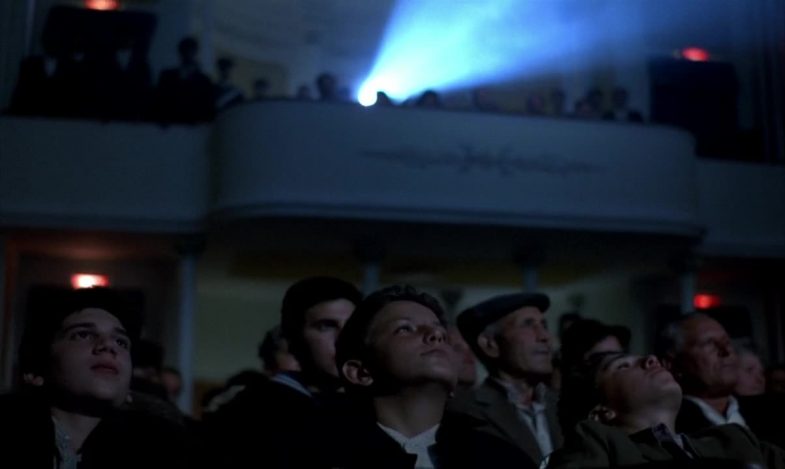 The smell of an arc lamp is something you will never forget. A faint whiff of white smoke coupled with a burst of ozone and metal is a unique aroma that stays with you. Now if that arc lamp is producing light to shine through acetate and projecting chemically recorded images that tell a story, now that’s alchemy. The bells of a changeover Simplex projector and the knowledge that a circle appearing in the top right hand of a movie screen indicates a reel is about to change. Sitting in the audience you know that working the changeover were the skilled hands of an IATSE projectionist. Men behind the curtain who could do all kinds of magic. They pulled off tails and heads of a reel prior to a week of shows and then splice them back together with Neumade splicers. In many ways it was a sprocketed ballet of skills and style. As a young movie goer sitting in the projection booth was a place of honor, this is where it happened, this is where movies came from.

Downstairs behind the concession stand coconut oil and Flavicol exploded off the surface of a 24 oz Cretors Kettle. The kernels were added and shortly a cacophony of almost timed eruptions took place as the kernels of air dried corn gave birth to fluffy pillows of ivory delight. Shortly after landing on the base of the popcorn popper, a light dusting of Flavicol was introduced, almost a baptism of flavor and sensation emerged.

The Coke was thick with syrup and the crushed iced that floated in that dark concoction played bumper cars in your mouth as you took a drink, enhancing the taste. The drinks were served in at most 18oz cups, forcing you to savor the bubbles and the sweetness. You developed a personal cadence on how you switched between popcorn and Coke. Sipping Coke to make sure you did not grow tired of the inherent saltiness of your popcorn became a discipline.

Many people swear that Milk Duds are the ultimate movie candy. I heartily disagree. The chocolate melts in your hand and the toffee lodges in your teeth. If you are not aware of the melted chocolate in your hand and you accidently touch your face, you could be embarrassed as you exited the theater. Heaven help you if you are in the cynical company of teenage boys. I had a brief fling with Twizzlers, but I found its plastic packaging noisy and frankly the methodology of consuming Twizzlers was clumsy at best. Usually Twizzlers are flung about as you tried to hit your mouth with the sweet red rope, as an aside I always was of the opinion that the black variety of Twizzlers was a travesty. Twizzlers in a theater, well it was a denial of the true nature of the confection.

I have to admit to this day, I am a die-hard Good and Plenty man. While prone to make a tad too much noise as the box emptied, this candy was a multifaceted taste experience. Candy covered with a seductively licorice center, it dissuaded you from crunching it. Good and Plenty begged you to slowly savor this sweet layer of its outer covering. Slowly after settling in your mouth, its dark soul was revealed. Upon the arrival of the licorice and Solomon like choice awaited you, to suck or chew. I must confess that I was spent after my slow discovery, and I chewed.

The theater auditorium was big and wide. The ceilings seemed to meld into the sky. The majority of the chairs in the theaters I attended were manufactured by The Irwin Seating Company of Grand Rapids Michigan. They were durable, comfortable and functionable. They had a simple cup holder and they seemed to work just fine as far as I was concerned.

The audience came into the theater, there seemed to be a great amount of excitement around the movie they were about to see and about movies in general. There was a buzz and an electricity, the tension rose as it got closer to showtime. When the lights of the theater dimmed, the audience grew quiet. The curtains slowly opened revealing a white canvas that was about to be painted with images, passion, and a compelling story.

In the projection booth, the projectionist opened the damper and images exploded on screen. You looked back and you saw that faint smoke that came when the two carbon rods created that arc of light. It was in many ways like incense at church, it was magic, it was wondrous….it was the movies. I saw it, I lived it and I loved it. I consider myself blessed to know what real movie going was all about.

What people fail to realize is that movie going involved so much more than just movies, it was the tone, the feel and the community that movie going provided. Things are about to change significantly, and not for the better. Multiplexes may get a temporary respite as a result of engorged seating and chicken tenders, but it will be short lived. Theaters will close in numbers not anticipated; their demise will mirror the record store.

My biggest fear is for the independent small-town theater. Their loss will have a deeply negative impact on communities throughout America. At the end of the day, I am still blessed I can drive downtown in my small precious city and see the glowing marquee of the Historic Artcraft Theatre. As things change, this theater becomes even more sacred. It is the heart of my community, and it serves the ideal of community oh so well.

The saving of the movie-going experience will be due to the efforts of their respective communities. No matter what pretense that may be presented, groups like the ICA and NATO have little or no ability to effect change.

Only the community can save the movies.