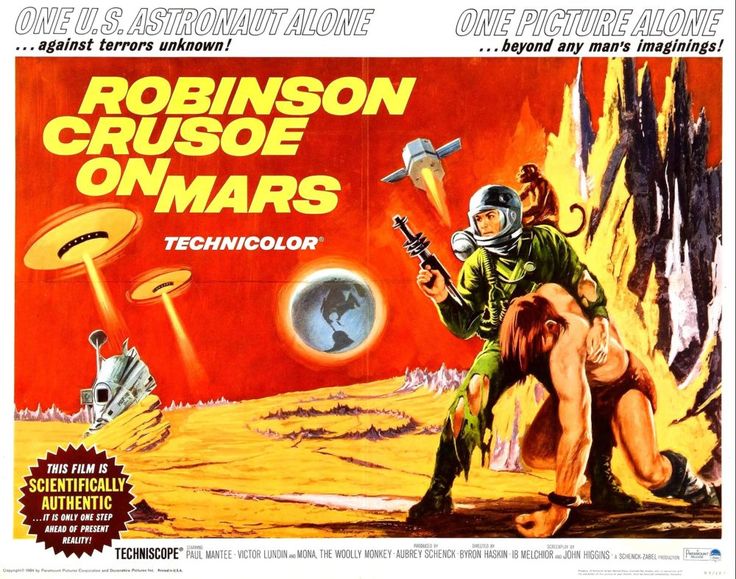 Few sci-fi films in cinema history present viewers with an alien landscape so starkly beautiful and desolate as the one in this film. Our setting is an empty and foreboding land of majestic cliffs, barren deserts, and imposing geologic monoliths. The wide-angle camera shots provide a breathtaking sense of geographic scale. Combined with that reddish/orange horizon and a black sky adorned with stars, the simple and uncluttered ongoing panorama evokes an emotional sense of isolation and alienation. The images here are every bit as enthralling as the sci-fi artwork of visionary painter Chesley Bonestell. The setting is a backpacker’s paradise.

But the only backpacker in this dream world is Cmdr. Kit Draper (Paul Mantee) whose space vehicle crash-lands on the rocky planet. He must find a way to survive, using only his ingenuity and resourcefulness. And that’s the story’s theme. Of course he does have Mona, the monkey, to help him in his quest. That a film can run to nearly two hours with a cast of just three people is amazing. But the stunning visuals help, as does Mona, who conveys real personality with her animated expressions, accompanied by those yelps and squeals.

You wouldn’t think there would be much dialogue with such a meager cast. But there is, as Draper talks into a tape recorder about his adventure, for posterity, and as he converses with Mona who in her own way returns the banter. That Draper’s haunting world is lifeless may be slightly deceptive. And only his continued exploration of his surroundings can reveal a definitive answer, as the plot proceeds.

Yes, the film’s science and technology are dated, but who cares, except purists? What I found a tad amusing was that Draper’s equipment batteries could last so long. But then creative liberties are to be expected when the science is fictional or semi-fictional. This is a story of grand human adventure reminiscent of “Journey To The Center Of The Earth” (1959). As such, it inspires us, and propels the imagination. When a sci-fi movie can do that, it succeeds.

With its evocative landscapes engineered by terrific cinematography and artwork, with its simple story of survival, and with a persuasive performance by Paul Mantee (and Mona of course), “Robinson Crusoe On Mars” is a striking film, one that ranks among my all time favorite sci-fi films.