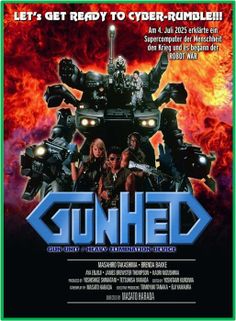 Ganheddo was produced by the same Japanese studio which brought us Godzilla, and it shows… but in a good way. Where many, higher-budgeted films of the time were moving to computer-generated effects, Toho stuck with scale models and stop-animation, giving this movie a gritty look not often found in films of similar provenance.

Though the plot is difficult to keep up with at times, it is still enjoyable, made especially the more so by the character of Seven. This movie will be a godsend for fans of the Mechwarrior/vertical tank type stories. The plot revolves around a group of scavengers who happen across a defunct lair controlled by machines, cyborgs, and their master, a central computer. The scavengers are after a rare power source which fuels the complex. Having detected their presence, the computer counts down to self destruct. Matters are complicated when one of the crew becomes incorporated into the machine’s consciousness.

Good cinematography, decent acting, and a fantastic story all contribute to this film’s warrants. It’s too bad that CGI has taken the forefront — I think modern filmmakers could learn a lesson from this one.