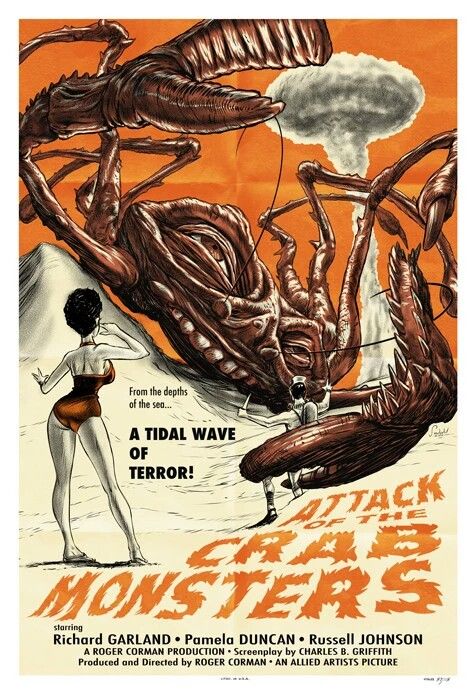 Ah, Roger Corman, the purveyor of the finely tuned art of ten-dollar-to-shoot-and-distribute sci-fi movies. This, Attack of the Crab Monsters, is part of the minor boom in the B-movie world of the GIANT THING THAT WILL KILL YOU craze, where anything that could be done to capitalize on the threat of *the* bomb (remember, kids, by the way, duck and cover!) could be marketable for a short time, as long as not much real solid thought or questions were raised. Charles Griffith’s script posits a group of scientists- off to seek out another expedition that went missing, on some small island out in the middle of A-Bomb-nowhere’s-ville, and encounter a super-atomic species of land-crab that get possessed by those that they kill. They (or rather one at a time as Corman’s budget had only enough for one crab at a time to shoot) project telepathically the ‘souls’ of those they kill, and can only be controlled by, gasp, electromagnetic fields!

So, once you get past the fact that there’s not a shred of intellectual engagement here, that there’s an opening title scrawl that comes out of a video game directing ‘You’ to be apart of the crab team and that the voice of the crabs are like the voice of God, and that the crab itself happens to have Asian eyes, it’s fun crap. Crap, of course, not to be taken likely, as you and your friends can make a very fine MST3K right in your living room for no additional charge! On that level, it’s classic stuff, and seeing one guy get his hand chopped off by a random rock, lots and lots of long takes of two of the scientists in deep-sea diving gear looking around for s***, is good for a gas. And the action is a real hoot, in that no-budget 50s tradition that combines miniatures that are really the production designer’s toy-towns made by their kids and stock footage of LOTS of A-Bomb explosions, plus the crumbling field or two. Did I mention you can see the strings puppeting the crab? Will these directors never learn?