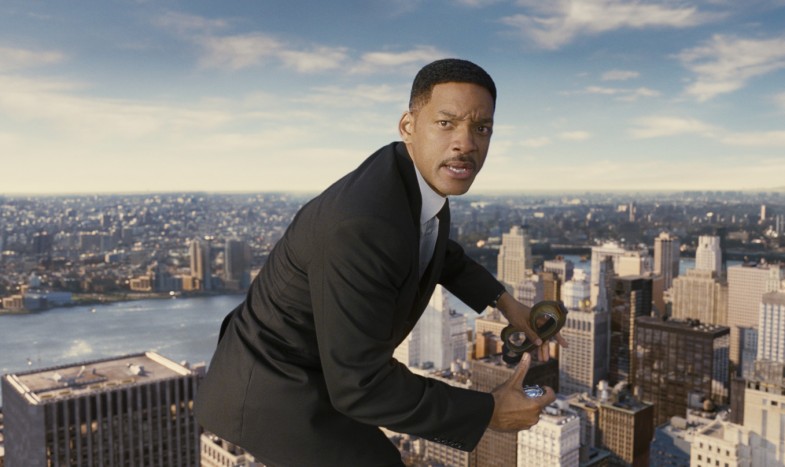 But the adaptation context pretty much ends there, as director Barry Sonnenfeld and lead actor Will Smith have taken liberties with the template, starting with replacing the comics’ more serious tone with the movies’ cartoony humor.

The films’ approach — a fusion of action, comedy and science fiction with calculated visual splendor — has connected well with mainstream audiences, judging from the first two MIBs’ millions in box-office moolah worldwide. So it was inevitable that, despite a decade-long gap since and the critical panning of the first sequel in 2002, Men in Black would be back.

Nice to see you again

For the most part, the new sequel should be a welcome dose of superficial fun at least to fans of the ’97 flick.

Smith and Tommy Lee Jones, as Agents J and K, are back together, rechanneling their respective uppity and surly stances, portraying dark-suited operatives who are experts at both wiping out extraterrestrial goons while subduing any hysterical reaction at the bizarreness they constantly encounter. (In the process, rather alarming onscreen violence abounds here and there, never mind if depicted in cartoony fashion.)

WILD, WILD WESTERNERS. Tommy Lee Jones and Will Smith fire away inside an alien lair.

As with the previous MIBs, this new one — via scriptwriter Etan Cohen (and reportedly via rewrites from David Koepp and Jeff Nathanson) — has a good-versus-evil big-picture premise that, along the way, depicts how the universe is far larger and more complicated than we think. This 2012 flick likewise loosely presents aliens as symbolic of the world’s variety of races and walks a very fine line in mining racial issues for laughs. (A portion where Smith’s Agent J has to steal a car then gets questioned by cops is MIB3’s purest comedic moment, though perhaps due in part to the absence of non-humans in the scene.)

As with its two predecessors, Men in Black 3 has a constellation of silverscreen stars, most of whom are underutilized. The esteemed Emma Thompson adds regal flavor to her bits (though a moment where she is made to act ridiculous is quite painful to watch). Arrested Development’s Will Arnett comes and goes without making so much as a blip. Saturday Night Live’s Bill Hader gets to portray Andy Warhol as a man trapped in his own pretentious artistry (the comic has much better moments of impersonation on SNL, such as his fun “Stefon”). And Entourage’s Alice Eve and part-Pinoy Pussycat Doll Nicole Scherzinger sizzle in their precious few moments of visibility.

And as before, there is an array of “celebrity extras” who are suggested as suspected aliens (and, thus, become a source of audience chuckles), this time including director Tim Burton, sports heroes Yao Ming, David Beckham, and — tada — Lady Gaga.

Men in Black 3 does have its share of new ingredients that prevent viewer weariness from setting in, besides the use of breathtaking digital 3D. (An aside: Soon enough, changeover cues — those signals for projectionists that are flashed on the upper right corner during theatrical screenings — could become extinct.)

For one thing, the story’s time-travel aspect allows for a “time jump,” whereby Agent J, armed with a handy time-traveling device from a geeky merchant, has to take a steep leap in order to go back to July 15, 1969 (a day before the Apollo 11 launch), and save a younger Agent K from being decimated by a time-traveling, revenge-exacting alien nemesis.

The resulting time jump sequence proves exhilarating and imaginative: as Agent J (and the camera, so to speak) descends from a thousand-feet height and fumbles with the time-warp device on the way down, he briefly gets transported into an even earlier time, when desperate men actually leapt from great heights following the 1929 stock market crash. (Another aside: Time travel is perhaps the most obsessed-about human wish in sci-fi movies, next to the yearning to fly.)

On another “time” note, Men in Black 3 has at least one glorious moment which ponders — by way of the New York Mets’ 1969 World Series victory — how a series of events in individual lives can coalesce into a momentous turn of events, resulting in one of the movie’s more fascinating and rare moments of profundity.

MIB3 also introduces new toys for the big boys called “monocycles” — motorcycles with a large vertical halo that seems to have been partly inspired by another eye-candy blockbuster, Tron, and is utilized with glee in MIB3’s token road chase scene.

BIKER BOYS. Will Smith and Josh Brolin aboard a pair of ‘monocycles.’

But perhaps the best new ingredient to the MIB trilogy is actor Josh Brolin, who plays the younger Agent K and thus gets to do a big-time impersonation of Tommy Lee Jones (who, curiously, has much lesser screen time this time). Brolin is practically the main star of this new movie, even managing to upstage Jemaine Clement (who takes on the disgusting-villain role but with the reliable chutzpah he had served up as one half of the joke-rock duo Flight of the Conchords) and, heck, even the boisterous Will Smith himself.

Brolin, clearly no longer a shadow of his father James, is such a hoot here that he might even get to reprise his latest role should there be an MIB4.

To be fair, Men in Black 3 does not really pretend to be anything more than an entertaining, 105-minute diversion. Yet I can’t help but point out a trio of regrettable quirks.

For starters, this years-in-the-making movie could not muster enough originality as to avoid regurgitating subplot points from three earlier Hollywood hits: Back to the Future, Superman II and The Terminator. (Once you spot them during MIB3, you just might be inclined to point to the screen once you see what I mean.)

Then there’s the slippery depiction of aliens — or put another way, foreigners — as largely the scum of the planet. Save for one crucial character, the slew of antagonists here are all non-humans. One can even take issue in the fact (coincidental maybe, but still) that Clement himself is not an American (he’s from New Zealand). And there is this rather ghastly sequence at a Chinese restaurant where the proprietors are depicted as being unscrupulous business folk. (Our ongoing shoal disputes aside, did that sequence’s characters really have to be of Chinese descent?)

To top it all, all the jokey lines, colorful settings, hyper-real situations and brisk action end up being a red — and white and blue — carpet for what seems to be MIB3’s bottom-line agenda: of propping up the United States of America as, shucks, Earth’s mightiest hero.

We see this not just in how the MIB is headquartered on US soil — New York City, specifically — but in some other details.

There’s the use of the iconic Chrysler Building as the time jump-off point, specifically its 61st floor with its ornamental bald eagles. (There are other towering skyscrapers in NYC but the filmmakers just had to pick the one that depicts America’s national bird.) And then there’s all the crucial action on July 16, 1969, the date when NASA launched Apollo 11 — not just to let men walk and then plant an American flag on the moon but, in MIB3’s case, to actually save the world from a potential alien invasion.

Sure, I just might be reading too much into all this. In which case, see Men in Black 3 for yourself and ponder why, in the midst of all the good time, it has its stars-and-stripes hard sell. And here I was thinking ours is a supposedly globalized era.

But then, who knows? Maybe Sonnenfeld and company, or whoever compelled them to go in this direction, just want to stress that “USA” does not stand for United States of Aliens.