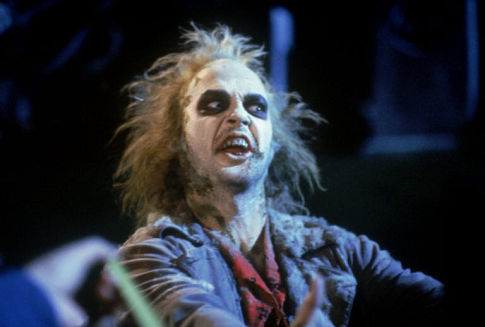 Beetlejuice tells the story of Adam and Barbara (Alec Baldwin and Geena Davis), who die in a car crash shortly after they marry and buy an isolated Connecticut mansion. As members of the recently deceased, they re-appear at the house, only to soon find out that the Deetzes, an annoying New York family, is ready to move in. They also can’t leave, so they try to spook them out of the house. However, they quickly discover that scaring these people isn’t as easy as saying “Boo!” They consider hiring a bio-exorcist named Betelgeuse (Michael Keaton) based on a flyer in their copy of Handbook for the Recently Deceased, but when they finally meet their afterlife case worker, they figure out that it might not be such a good idea. The couple also learns that they have to stay in the house for 125 years, so they have to scare them out themselves if they don’t want to live with them. They do find a friend among the Deetzes – the young goth girl Lydia (Winona Ryder), who can see them because she wants to be a ghost.

Even after Adam and Barbara pull off their big scare by forcing the Deetzes to dance to Harry Belafonte’s “Banana Boat Song,” their plan isn’t working. When that doesn’t work because the family wants to turn them into a sideshow act, they finally decide to call Betelgeuse and chaos breaks loose.

Much of this film is supposed to rest on Michael Keaton’s shoulders. He plays one of those characters that everyone talks about but doesn’t come in until late into the story. Keaton pulls off a fine performance, which really gave his career a necessary boost, but I have to say that I’m more drawn to Winona Ryder’s performance as Lydia. She plays the character so well, making her dark and withdrawn, but still someone anyone can relate to. It’s interesting that these two characters and their performances are more noteworthy than Alec Baldwin’s and Geena Davis’. Baldwin and Davis kind of get lost in the shuffle, especially since they are practically shut-out of the film’s climax.

Beetlejuice was an original idea, but not Burton’s. While he worked on his pet project, Batman, he needed a follow-up to Pee-Wee and picked novelist Michael McDowell’s story. Burton sought to tone down the violent script, turning it into a lighthearted comedy and after over 20 years, I doubt anyone could conceive of this film having any other tone. Even though Burton did make the film better with this decision, I think the final script by McDowell, Larry Wilson and Warren Skaaren has one major problem. The central characters (supposedly Adam and Barbara) get lost in the story, particularly towards the end of the film, as I noted. Once Betelgeuse enters the film (physically, anyway), he and Lydia become the main characters, even though everything for the last hour of the film centered on someone else.

Even though Beetlejuice may not be as funny as it was when you were a kid, it remains a fun film, despite the glaring story issues. Keaton’s performance may be a little too over-the-top (in Batman he’s the opposite – a little too restrained), but it fits the ridiculous Betelgeuse well. The cheesy effects also work well with the B-movie feel the movie has. Burton has a singular vision and style and Beetlejuice will always be a perfect example of that, no matter what else he does for the rest of his career.