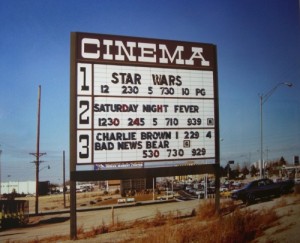 While May the Fourth (be with you … yeah, yeah, we get it) has come and gone, what might be the most important naturally occurring high holy day on the geek calendar happens this Friday – the 35th anniversary of the release of the very first (or fourth, depending) film in the Star Wars saga. On May 25, 1977, the movie known then as simply Star Wars and now as Star Wars IV: A New Hope opened in theaters across the country, and between it and George Lucas, forever changed movie making, movie going, movie merchandising and our culture, both pop and general.

Thanks in part to its re-releases, Star Wars now stands at number four on the U.S. all-time biggest grossing movie chart (although fifth-place-and-rising The Avengers should be overtaking it in about 5 … 4 … 3 …) and it launched an eventual six-part epic that stands as the third highest-grossing movie series ever domestically, behind those anchored by Harry Potter and James Bond. (Worldwide A New Hope is only at 33; adjust the U.S. numbers for inflation and it’s perched at number two, right behind Gone with the Wind.)

Suffice it to say, the movie’s had a bit of an impact. And now that it’s about to enter into middle-age and that less-desirable 35-54 demographic, it would seem a prime time to analyze its place in the world today. Except for one thing: it has never once left the public consciousness. Thank George Lucas and the fanboys equally for that. Seriously, the director-writer-producer-mogul-inventor-FX pioneer and ex of Linda Ronstadt has created a vast empire himself and become guru, god and necessary evil to thousands of filmmakers who have come after him. And the fans? I bet we all know a Star Wars devotee or two. I think we can agree that things like naming your twins Tatooine and Dagobah or annually performing Jefferson Starship’s “Light the Sky on Fire” from “The Star Wars Holiday Special” during the family Christmas party only qualify you as a rookie (as opposed to Wookie) on the “Star Wars” obsession scale.

Truth be told, I was not the ideal audience for these movies. In other words – George, I was not the droid you were looking for. Science fiction, sci-fi, SF, speculative fiction – whatever you want to call it – is not my genre of choice (although I like and love many works in the field, both novels and films). And I don’t have a spare room devoted to action figures (NEVER taken out of the box, natch) or a certified and authenticated Boba Fett uniform that I wear to public events. (If you’re reading, you know who you are.)

My confession goes even deeper: I never saw the second trilogy, or first in chronology if you want to look at it like that. This despite the presence of A-listers like Samuel L. Jackson, Natalie Portman, Ewan McGregor and Liam Neeson. Someday I might. Maybe if I can ever bleach from my mind the reviews I read of The Phantom Menace, Revenge of the Sith and Attack of the Clones.

But I did enjoy the initial three enormously, even if I do fall in line with the general quality consensus:

1. The Empire Strikes Back (Great, great movie)
2. Star Wars
3. (A distant 3) Return of the Jedi
That’s it for now, but expect more Star Wars-related posts throughout the week and possibly a few surprises. And by the way, Talk Like Yoda Day, yesterday was. Sorry we missed it, I am.