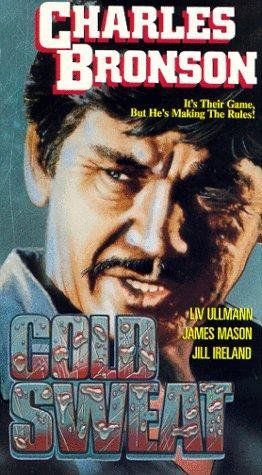 ‘Cold Sweat’ is a 70’s actioner I was actually quite pleasantly surprised by. Charles Bronson plays a guy whose cronies have caught up with him after spending many years in jail for a crime that he fled from. He’s in sanctuary in France with his wife (played, rather slummingly wouldn’t you say? By Liv Ullmann), and what do you know, his evil friends from the past catch up with him and takes his whole family hostage so that they can complete the One More Job together. Bronson accepts, but since this is a Bronson film, He’s Got Other Tricks Up His Sleeve. So begins a fun little cat and mouse game, mainly dealing with the daughter or other of the bad guys (played hilariously by James Mason) and the trade-offs Manson and Mason are fun to watch. There’s lots of chases too! Wee! Finally, I just want to comment on the print of the film I saw on DVD. It looked somewhat banged up, but I thought it just added to the viewing aesthetic of the movie! I just felt I was in a New York grindhouse movie theater, with this double featured with say, Dolomite or something.