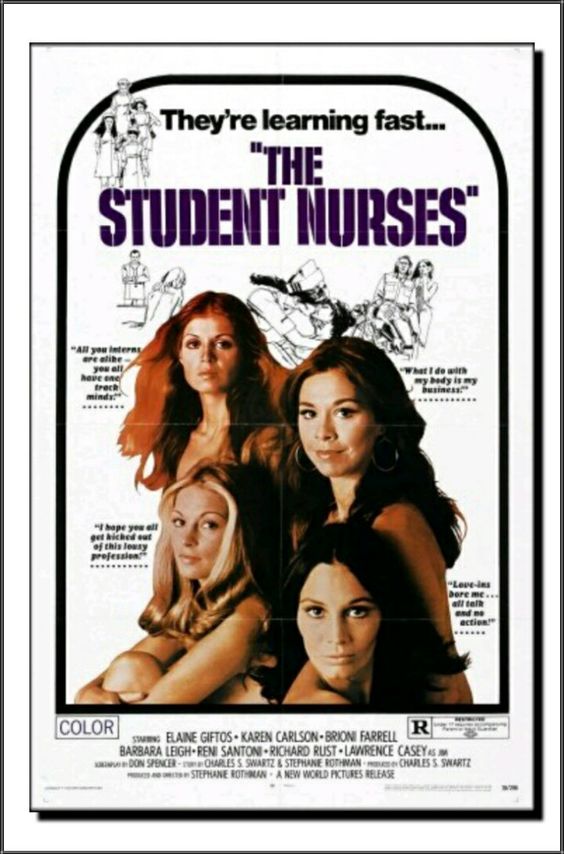 This is an early entry into what became a veritable genre of low-budget exploitation movies focusing on a group of sexy young women working as nurses, teachers, flight attendants, models etc. These movies offered some sop towards the women’s liberation movement of the era, but were usually far more interested in liberating the gorgeous actresses in them from their clothing. As you might expect, this movie is about the lives and loves of student nurses. The blonde is torn between gynecology and psychology (and two handsome doctors that work in each field). The Hispanic girl (Brioni Ferrell) gets involved with a Chicano activist and ends up on the lam from the police. The sensitive redhead falls in love with a terminally ill patient. And the hippie girl (Barbara Leigh) goes to a “love-in”, drops acid, and gets pregnant after a one-night stand with a hippie creep.

This is definitely a pretty dated movie. There is a whole abortion subplot that seems pretty jarring by today’s standards (but are things really so much better today in movies where everybody has lots of sex but nobody ever seems to get pregnant and has to make these hard choices?) The director of this was the underrated Stephanie Rothman who directed stuff like “The Velvet Vampire” and “Sweet Sugar”. Rothman has never gotten her due as a great female director because she never really emerged from the Corman exploitation school, but then she also never sold out like Penelope Spheeris or Katherine Bigelow (who started out with stuff like “Decline of Western Civilization” and “Near Dark”, but ended up making the worst Hollywood crap imaginable after they finally “made it”). This is one of Rothman’s first movies, and definitely not her best, but I always have time for one of her movies.