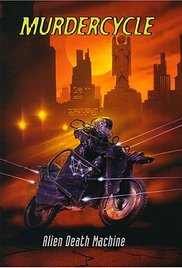 For my money, there’s nothing more terrifying than a plastic-covered motorcycle driving laps around people in slow motion. My chest was pounding as laser blasts from this unholy machine ricocheted off wooden wagon wheels and rusty metal. There was too much heart-stopping action in this movie to withstand!

“Murdercycle” is a weak (albeit fairly harmless) horror/action film from Full Moon pictures. The acting is very, very poor. Community theater level poor. People can’t hold guns properly in this movie, and acting is replaced with disconcerting twitches and squints. Those faults are humorous ones, however; we can enjoy ourselves with the low quality of the acting and sets (two buildings, a lot of trees, and a janitor’s break room comprise the shooting locations).

My real problem with “Murdercycle” is the character of Dr. Lee. She’s a woman with psychic powers employed by the government. How does she have these powers? She explains, “Everybody has the ability to use this gift – but few do.” I would venture to guess that the reason that people don’t use this gift is that it turns you into a somber, completely uninteresting bore who contributes nothing to life. This character is pointless, uninteresting, unattractive, and annoying.

The murdercycle itself is a funny thing. A dirt bike covered with black plastic mounted with lasers of varying power. One minute, the laser blows up a truck. The next minute, it’s rendered impotent by rotten wood. More often than not, the murdercycle kills it’s victims by simply running over them. That’s some space-age alien technology for you.