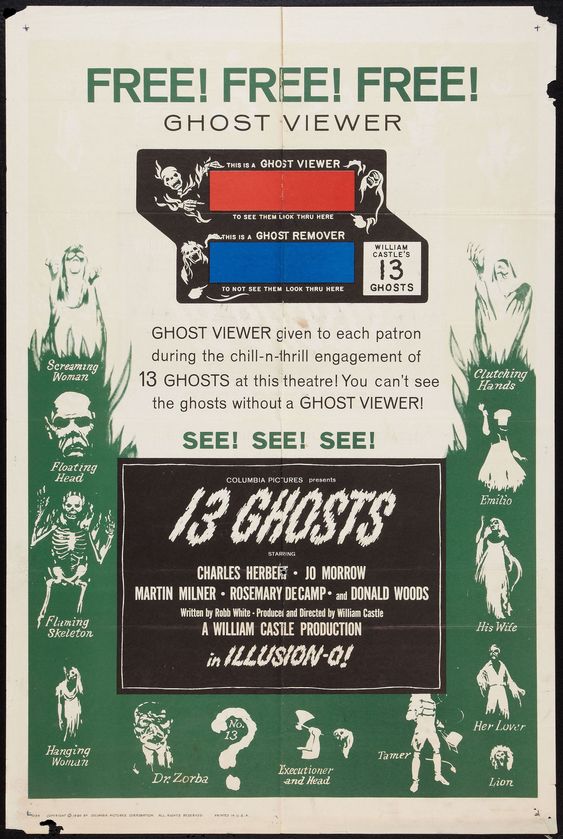 This film by William Castle about a family of four moving into a house professed to have no fewer than 13 ghosts is a great deal of fun. Donald Woods is Cyrus Zorba, a paleontologist down on his luck. His furniture has just been removed from his flat and his wife and two children, Medea and Buck, seem used to being in continual dire financial straits. While sitting on the floor for Buck’s birthday party, a creepy message comes telling Cyrus to see a lawyer in the morning. Cyrus and wife Rosemary Decamp go and discover that Cyrus has inherited a huge mansion from his Uncle Plato as well as a package containing some weird type of glasses. It seems that Uncle Plato collected ghosts. The rest of the story details what life is like in this house that has these ghosts. I did not have the pair of glasses so cannot tell you what it looked like in Illusion-O, but I bet it was even more fun. Castle always seems to do a good job at creating entertaining, fun films, though none of them ever seem to be much more than that either. The mystery is not hard to figure out at all. The acting is good all around with youngster Charles Herbert giving a nice performance as Buck. Woods is good as the family patriarch and Jo Morrow is just beautiful as daughter Medea. Martin Milner plays Ben the lawyer. And as a retainer in the house is Elaine, played by none other than Margaret Hamilton(always a joy to see her). When Ben first arrives at the house to see how the Zorbas are doing, Buck says “ring the bell and you’ll see a witch.” Of course the witch reference goes throughout the whole film as Hamilton looks witch-like and this is one marvelous inside gag about her Wizard of Oz performance. The effects for the film are pretty tame and very hokey, but this film is just good, old-fashioned fun. I liked it from beginning to end. If you loved the new one and decide to go back and see the old one – you will be very disappointed. Just as I was disappointed having seen the old one and moving to the new one. They have nothing except some threadbare incidentals in common and a producer named Castle(though a different first name for each).