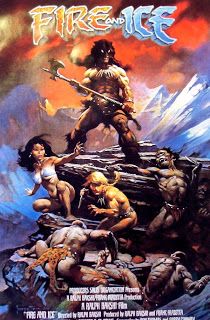 Fire and Ice is Ralph Bakshi’s animated vision of Frank Frazetta’s fantasy world (who even assisted in the making of this feature). The story is your basic tale of good verse evil; a ruthless sorcerer and his mother are intent on taking over the world, using their power to spawn ice glaciers to achieve this goal. Their last resistance is Fire Keep, a city built around a volcano. Really, the story and characters are kept simple while the showcase of this movie is the animation and action. Bakshi uses a process known as rotoscoping in this film (not his first time though). Rotoscoping is when actors are shot in live action and then later drawn over and added into the backgrounds. Nowadays, you might call it a form of motion capture. Anyway, the effect is actually pretty cool, bringing a certain realism to the characters that is absent from traditional animation. Keeping this in mind, we now come to the action in this movie, of which there is plenty. The movie only takes breaks to set up the next scene of combat for our two warrior heroes. It’s often rather brutal, involving swords, spears, axes, and arrows. Aside from taking on gangs of Subhumans (the evil foot soldiers), there are also a few mythical-type creatures to deal with. Fire and Ice is the third Bakshi production I’ve seen and at that, the best. While I think it could’ve been better, it’s still a fairly fun and entertaining fantasy picture, and I believe that’s all it’s meant to be. The Limited Edition DVD from Blue Underground does the movie justice with a decent transfer (the video shows some age but the audio is fine) and a few featurettes. There’s also a sufficient commentary with Lance Laspina and Bakshi, who comes off as a bit of a jerk. Finally, the set includes Laspina’s documentary, Frazetta: Painting with Fire.