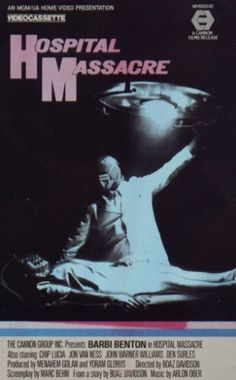 “Hospital Massacre” is a pretty low aiming shot in the mid 1980’s slasher stakes, and it has so many crappy moments in it that you should have a good laugh while watching it. Basically, glamour model Barbi Benton plays Susan Jeremy, a woman who pops into hospital for some routine test results only to find that she can’t get out again. This is because a maniac with a serious grudge against her is blocking all escape routes and won’t stop until he gets what he wants!

Now let me say that the film isn’t all bad, but what really doesn’t work is the hilarious implausibility of the “situation” that Susan finds herself in. As soon as the killer knows she is in the hospital, he plants some bogus test results in her file, and from this point onwards all the other hospital staff treat Susan like a dangerous and/or mentally deranged powder keg who must be detained at all costs. Thus we see a perfectly normal woman forced into straps and restraints, slammed into locked wards, subjected to humiliating examinations and, of course, in between all that she’s being pursued by a masked killer. Now the film makes quite good use of the hospital location for some good murders, but this supposed inescapability I just did not swallow. Anyway, for even more fun, let me list a few of the really outrageous goofs this film thinks it can get away with. Susan actually leaves her boyfriend in the car waiting while she pops into the hospital for “a few minutes”. Amazingly, several hours go by and darkness falls before he even comes to look for her! Next watch out for a side-splitting scene when Susan hides behind a portable screen on wheels just inches away from the killer. Watch as she drops a lighter on the floor and retrieves it with her foot while the killer stares right at the screen without out seeing anything. The screen even has about 12″ of space below it where Susan’s legs can clearly be seen. Oh sorry she also pulls the material aside to peer through the screen at him, and he doesn’t see that either. Next watch for the notorious examination scene where Susan is stripped naked and felt up all over by a doctor in a supposedly sinister fashion. NO WAY would this ever be tolerated or handled in such a sleazy manner in a real hospital. Plus, save your breath for the scene in which a fleeing Susan bursts into a room full of patients in traction, who all spring to life and writhe their tethered, bandaged bodies around like it’s a scene from some kind of purgatory. Why? I don’t know. There’s no reason at all for this shot, expect to put something bizarre to look at into the running time.

I’ll say this though, Barbi Benton is not bad in the role of Susan. She screams well enough and is attractive to look at throughout. Shame that the script gives her so many stupid, dumb things to do and never once is there a moment when she decides to just leave the building (it’s not a prison, fer crying out loud).