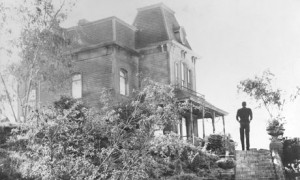 Hitchcock’s macabre pulp masterpiece begins with the most dangerous piece of tax evasion in movie history. Sweaty, leery, cowboy-hatted businessman Tom Cassidy has come into the office of a Phoenix realtor, George Lowery, to close a house purchase in cash: an ostentatious wedding present for his 18-year-old daughter, due to get hitched the next day.

He boasts to the secretary, Marion Crane, that the $40,000 he’s waving under her nose has been amassed without reference to the tax authorities. He even brags that he never carries more than he can afford to lose. In a shrewd instant, Marion reaches a conclusion Hitchcock cleverly never spells out. If she steals his money, he can take the hit and won’t call the cops because that would alert the IRS. She’s right. As things turn out, Cassidy only engages a private detective, the stolid Arbogast. But her fantasies of Cassidy’s rage-filled threats about getting his money back are weirdly prescient: “If any of it’s missing, I’ll replace it with her fine soft flesh!” What a very psycho image.

Lost and disorientated on the rainy highway, runaway Marion winds up in a remote motel – not so different from the hotels where she enjoyed furtive lunch hours of passion with her lover. It is run by a strange taxidermy enthusiast, Norman Bates, played by a saturnine Anthony Perkins.

Hitchcock’s low-budget, black-and-white shocker looks like a bad dream of crystalline clarity and detail, ushered in with crazed operatic intensity by Bernard Herrmann’s superb score. There are moments in which it appears to decelerate to a floating slo-mo: Arbogast (Martin Balsam) climbing the stairs; Marion’s sister Lila (Vera Miles) approaching Norman’s house, her eyes stark and terrified. And then Hitchcock will stamp hard on the accelerator pedal, most famously for the shower scene in which Marion (Janet Leigh) will meet her destiny. For all its jagged cuts and shrieking violin stabs, it somehow seems as substantial as an entire second act, as if half an hour’s dramatic incident has been compressed into one dense and horrible mass. (It took Hitchcock seven days to film, out of a 30-day shooting schedule.)

Psycho is the sort of brilliant, nimble, cheap movie you’d expect from a young hotshot at the beginning of his career. But Hitchcock was 61, known for classy and elegant films with high production values, and he was reaching what many saw as the end of an illustrious career. Yet Psycho gave Hitchcock a quantum leap to further greatness.

The story took its inspiration, partly, from the true-life horror of Ed Gein, the notorious 50s serial killer who made bizarre trophies from his victims’ skin, their fine soft flesh. He, in turn, was said to have been a reader of pulp magazines such as Unknown Worlds and Marvel Tales, which featured the work of Robert Bloch, who later wrote the novel, Psycho, on which the movie was based.

My favourite part of the film is something only an Englishman could have devised. Marion is driving out of town with the stolen cash, having told her boss she was taking the money to the bank and then going home to bed with a headache. While waiting at a red light, she actually sees her boss with Cassidy: their eyes meet, and she can’t help herself giving him a little polite smile of greeting. But he returns it with a puzzled frown, and she looks away, mortified, stricken with embarrassment. It would be out of the question to shout some absurd excuse from the driver’s-side window. The moment is superbly played by Janet Leigh: this is an unbearably tense and horribly real scene – different, in many ways, to the remaining rococo fantasy of strangeness and fear.

The film’s inspiration, for me, resides in the twin worlds of motel cabin and house. The rooms themselves are stark, bright, featureless, anonymous and modern: models of the 20th-century American service economy. But the mouldering house on the hill behind comes from the 19th century, a dark suppressed history, a world of Edgar Allan Poe. The house is gloomy, cluttered, infested with a secret personality. As the door opens, you can almost smell the damp and furniture polish. On her brief, horrified tour, Lila finds a little toy rabbit (does Norman still take it to bed with him?) and Beethoven’s Eroica still on the turntable.

As Marion undresses in cabin number one, Norman is the creepiest-ever boy next door, spying on her through a peephole. Earlier that evening, he’d invited her to supper: “I don’t set a fancy table, my kitchen’s awful homey!” Perkins turns the second syllable of “homey” into a weird, bashful, gulping little laugh, with a vulnerable, boyish grin. Has he rehearsed this unctuous line in his head? Did he use it on the other two missing women? Later, we will see his second grin, his mother’s grin: sinister and predatory and defiant, bared at the audience directly. And with pure outrageous chutzpah, Hitchcock superimposes the skull’s death’s-head subliminally on his grin, and then dissolves to the radiator grille of Marion’s recovered car. Was there ever a directorial flourish like it?

I sometimes wonder what happened the day after the theft, the wedding day of Tom Cassidy’s daughter. The ceremony probably took place in a church like the one from which we see Sheriff Al Chambers emerging after a Sunday service. Was Cassidy (so tremendously played by B-movie stalwart Frank Albertson) beaming and proprietorial and still unaware of his loss? Was he still complacently planning to announce the gift of a house at the reception? Or did he already know something was up? He and Lowery might have gone to the bank after they saw Marion on the street the day before. He might now be scowling and frowning on the wedding day he was unwilling to cancel, curtly shaking his head when his wife and daughter asked if anything was wrong. And the 18-year-old herself: is her sublime innocence the key to the whole thing? Lonely, frustrated Marion, who yearned for marriage and respectable love … perhaps something within her snapped with rage at the thought of this smug little rich girl and her unearned day of happiness. Part of the film’s genius is that this first psycho moment happens silently, invisibly, inside Marion’s head.