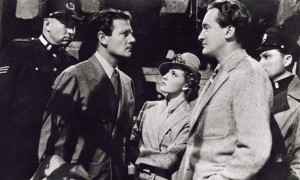 It’s always the same when you dilly dally in getting up to the buffet at a social function – most of the luxury dishes are gone. So being late to this party it was no surprise my favourite fare was already devoured: my all-time favourite film The 39 Steps, Dial M for Murder, Rear Window, Strangers on a Train. But perhaps when the high-end items are out of the equation it allows you time to revisit some of the more humble fare, and when the chef is five-star, humble fare nourishes the mind and soul.

Foreign Correspondent
Production year: 1940
Country: USA
Directors: Alfred Hitchcock
Cast: Herbert Marshall
More on this film
Foreign Correspondent is described variously as a lesser Hitchcock work, a shameless exercise in propaganda, a glorified B-movie and one of the greatest spy thrillers ever made. It is all of these and none of these: a breathless yarn with the most serious of intents that soars well beyond mediocrity but just below genius, yet remains a film that I feel should be included on the master of suspense’s top table.

Made in 1940, during Hitchcock’s early Hollywood period, the plot centres on a Europe that expects war any day. Due to the US officially remaining neutral when the movie was made, fiction and reality are intertwined to both mask and reinforce the allegory of Allies and Nazis. It was made to inspire primarily American audiences to seek out the truth about what was going on in Europe – and in many ways to prepare them for an inevitable US role.

The action begins as the editor of the New York Globe (Harry Davenport), fed up with not getting a handle on what is happening in Europe, is ranting at one of his deputies. Sick to the teeth of economists, politicos and foreign correspondents spitting out government releases with no context or analysis, he rages that he wants someone to get to the bottom of the story. “I want someone who doesn’t know an ‘ism’ from a kangaroo. A good honest crime reporter is what the Globe needs. It’s what Europe needs. There’s a crime hatching on that bedevilled continent!”

Johnny Jones (Joel McCrea), crime reporter extraordinaire, gets the nod, but not before the editor rechristens him Huntley Haverstock – a name befitting a newspaperman of such grandeur. It is hard not to smile at a time when pressmen were so dashing and heroic, when they were called something so absurd as pressmen. Naturally Jones ends up at the heart of the intrigue suffocating western Europe, by discovering a spy network betraying Britain and the Netherlands to its enemies – and no “Hitchockian hero” he, Jones/Haverstock finds trouble because he is looking for it.

Using a journalist rather than a spy, diplomat or politician allows Hitchcock to go places that a wartime thriller would normally avoid: beyond the dispatch box and radio speeches to ask what is the motivation that brings countries and the shadowy cabals that influence them to a state of armed conflict. And what effect does this have on ordinary people?

The subtext is clear: Europeans are jaded from centuries of conflict and the Americans there to be the eyes and ears across the Atlantic have been infected with this world-weary malaise. The Globe’s veteran London correspondent is more interested in hangover cures and meeting his girlfriend in a hotel than in covering the biggest story of the century. The Londoners at a luncheon for peace talk about restaurants and dignitaries and matters of seeming irrelevance. The Americans are what Europe needs. And Hitchcock pulls off such an audacious boast about his adopted country by getting Haverstock to work with the refined English reporter Scott Ffolliott (George Sanders) – whose surname’s strange spelling stems from the fact his ancestor was beheaded by Henry VIII – just as savvy and smart as he. Co-operation is key, but so is looking beyond the lies and duplicity of politicians and the military on all sides.

Josef Goebbels instantly recognised what he was watching, calling the film: “A masterpiece of propaganda, a first-class production which no doubt will make a certain impression upon the broad masses of the people in enemy countries.” And being the master of propaganda that he was, must surely have known there is no greater dampener for propaganda than praise from the enemy.

Hitchcock’s humour and brilliance are naturally in evidence: an assassin makes a getaway under a crowd’s umbrellas; an old man in a sleepy Dutch village suddenly finds the road in front of his home full of speeding police cars and eventually gives up trying to cross it; Hitler is cited as potential story source; but as Jones reads a shamelessly nationalistic speech at the end of the film over the Star-Spangled Banner, it’s clear what the film’s intent is. Perhaps Hitchcock, a man who took his national duty seriously, knew that when the message comes in such an elegant envelope, it is hard to resist.