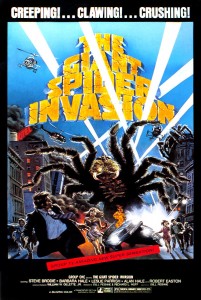 Baron Bill Rebane is an American film director, producer, and screenwriter. He is best known for low budget horror movies such as Twist Craze and The Giant Spider Invasion. Rebane also ran for Governor of Wisconsin in 1979 and 2002 as the American Reform Party candidate. Rebane is credited with the introduction of the first 360 degree (wrap-around) motion picture process, an innovation that spurred the “Cinemax” process and today’s Rotoscope cameras. Bill is also the producer, director, writer, and/or cinematographer on 12 independent feature films, all of which enjoyed successful international theatrical releases. During this period, Bill founded and ran the first full-time feature film studio in the Midwest.

Brad Wilke: What were some of the challenges you faced in bringing THE GIANT SPIDER INVASION to the screen?
Bill Rebane: To have to create unplanned special effects (the spider) without even a reasonable budget.

Brad Wilke: What was your distribution strategy? How successful do you think it was?
Bill Rebane: I had distribution before starting. It was a phenomenal success, proven by the box office grosses for that year and beyond. [Editor’s note: The Giant Spider Invasion grossed over $23 million, making it one of the top 50 highest grossing films released that year].

Brad Wilke: How do you feel about the film’s current cult status? MST3K and others, including the recent Milwaukee Film Festival, have all celebrated your film in one way or another. Where do you see its place in film history?
Bill Rebane: I am amazed that it has continuous “legs,” so to say. MST3K sucks, but [it was] cute. Besides, [the] MST3K originators ha[d] no license to do what they did. They are still making money; I don’t see a dime.

Brad Wilke: What came after THE GIANT SPIDER INVASION?
Bill Rebane: After GSI came Gift from a Red Planet and Alpha Incident. The studio grew out of necessity and further production demands. I became totally self-supporting in [the] late 70’s.

Check out the original trailer below:
The Giant Spider Invasion (1975)