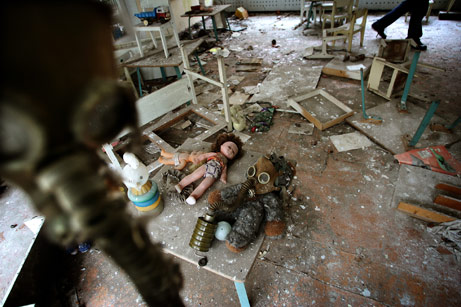 What are you doing right now? Whatever’s going on, table your plans immediately and watch this absolutely amazing short movie about a futuristic nuclear clean-up project gone awry.

Titled GAMMA, this atmospheric creature feature was filmed near the industrial wreckage of Baikonur, Kazakhstan and abandoned communities of Prypiat, Ukraine. This five-minute flick is A.) a stern reprimand to never consort with half-fungi, half-molluscs; and B.) the coolest thing you’ll see all day.

Here’s the synopsis from the filmmakers at Factory Fifteen, who also worked on that astounding Robots of Brixton short:

In a post-nuclear future, when the earth is riddled with radiation, a new urban developer proposes to regenerate the cities back into civilisation. GAMMA sets out to stabilise the atomic mistakes of yesteryear for the re-inhabitation of future generations. Using its patented ‘Nuke-Root’ technology; part fungi, part mollusc, GAMMA intends to soak up the radiation and remove it from the irradiated cities, rebuilding them in the process.