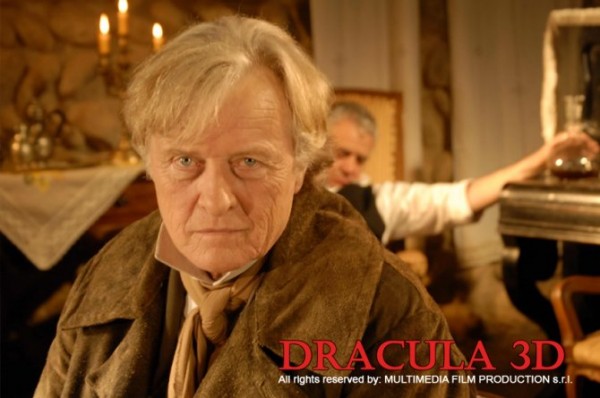 Hollywood welcomed the Italian master of horror Dario Argento with a standing ovation during the inaugural evening of the Los Angeles Italia Festival. Argento presented a world premiere 25-minute preview of his latest film Dracula 3D, starring the Roman director’s daughter Asia Argento, along with Rutger Hauer, and Thomas Kretschmann in the role of a fascinating and diabolical Count Dracula.

Blood, chopped heads, shreds of bite-size meat. Dario Argento does not skimp on the audience’s dosage of horror and seat-squirming in the in the movie, filmed in English, in 3-D, and full of special effects (Dracula transforming into an owl, a wolf, a swarm of flies).
The director required nude scenes of the female actors, daughter Asia included, seasoning it all with a thread of irony, which elicits laughs, reduces tension, and reminds us of Italian B-movies of the ’70s that were so dear to Quentin Tarantino. Also present during the evening was actor Franco Nero, the original Django in the Sergio Corbucci (to whom the festival is dedicated) film that will now be again brought to the large screen by the Pulp Fiction director in the remake Django Unchained.

The Los Angeles Italia Festival, presided over by Pupi Avati – who presents a premiere of Il cuore grande delle ragazze– and organized by Pascal Vicedomini, is at its 7th edition. As is customary, the Italian festival takes place the week preceding Oscar night, which again includes Italian nominees, Dante Ferretti and Francesca Lo Schiavo (for the Martin Scorcese film Hugo), and Enrico Casarosa, author of the Pixar computer-animated short La Luna (the moon).