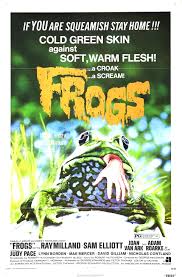 “Frogs” is set in Florida around a prominent southern family whose patriarch Jason Crockett (Millan) is polluting the island he owns. In the mean time a naturalist/photographer Pickett Smith (Elliot) is taking pictures of the area, just from a shot or two he sees the place is polluted. While in his canoe he’s capsized (Flips it himself) by some of Crockett’s family, Karen (Van Ark) and Clint (Roarke) who likes putting back some brews. They apologize and he comes to the mansion for a wash and talk. While all this is going on you have the constant sound of frogs and a lot of crowing. Old man Crockett can’t stand the sounds of frogs and complains about them 24/7. He wants them wiped out. Crockett sent out a guy named Grover to look into this and goes missing in the swamp and you guessed it, he’s been killed by the frogs or is it toads, well lets say nature. Smith gets the notion that nature may be fighting back, taking revenge for what man has done to them. Jason says that’s hogwash and does not care. One by one people start getting knocked off, often in amusing and also boring ways by just about every creature you can find that slithers in a swamp. One that stands out is Kenneth (Cortland) who gets knocked off in the green house when some reptiles start breaking various glass jars containing “poison”. So of course he goes over to investigate and is overcome but he fumes. The lizard’s just laugh at him. Various family members and other miscellaneous people get killed and it’s all very silly. To list a few, Michael (Gillian) basically trips and is over taken by canopy of spiders webs and spiders, snapping turtle attacks Jenny (Borden) stuck in mud, snake takes down Iris (Irving) along with leaches (fake as can be and way overacted,) Clint killed by a snake in the water and to top it off they kill off the blacks who worked on the estate. I mean who can’t out run turtle? At least they finally brought out a gator to kill poor old Stuart (Skaff). Old man Crockett decides he’s not going anywhere and will stay at the estate. Amusing how Crockett was barking out orders as if he had control over his family and workers to stay and die with him. So when the rest hightail it he stays behind with his poor dog. Smith, Karen and Clint’s kids escape with some trouble and hail a driver on local road. Amusing how the driver stops and picks them up with a loaded shotgun in Smith’s hand. Its hinted that this is going on elsewhere. As for old man Crockett, eventually he falls out of his wheelchair and is overcome by frogs bouncing around at his windows.

I had read about this film for some time and finally saw it on “THIS TV” network. I’m glad I didn’t hold my breath to see it because it was silly indeed. It’s mostly boring, rather then a terrible film. The acting is not great, that’s for sure. Even Millan who is good, just sits around and bitches about the frogs all day. He plays the same angry crippled old man from The Thing With Two Heads. Joan Van Ark looked good. I’d say she was one of the better parts of the film, along with Sam Elliot doing an early role. There really weren’t that many special effects accept for the opening and closing credits which I think they spent most of the budget on. The biggest problem is that Frogs aren’t dangerous, so you have various other creatures from the black lagoon doing the dirty work on the humans as the frogs pull the strings from behind. It comes off as amusing far more than scary in any way. I love the toad walking around on the cake with icing on his feet and Millan blowing away the snake in the dining room. The deaths are silly to impossible. This was one the early nature strikes back films and so man more came about after this. Overall it is silly but it’s actually and good watch just to pass some time, laugh a little and remember the 70’s. I’m always up for seeing nature strike back at man