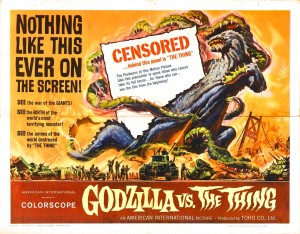 “Godzilla vs. Mothra” (1964) has been known for a very long time as probably the best Godzilla film, in many circles even over the first one, and rightfully so. All the elements were probably at their best for this film – the script was entertaining from start to finish; the characters were likable and interesting; the music was at its most powerful and memorable; the filmography was its most striking; and the monster action incredible. This was also the movie with, hands down, the greatest Godzilla costume ever created.

Known as “Godzilla vs. The Thing” before being changed to the present title somewhere along the line, I cannot stress enough what a great film this is. Godzilla makes an awesome first appearance, and from there the movie actually features a lot of very realistic rear-screen photography of Godzilla roaming around real Japan landscapes and streets. There are some truly amazing shots of Godzilla coming from behind real buildings and mountains, as the usual crowds run for their lives. For some reason, Godzilla films in the original series very rarely used this process after this film, and in the rare case they did, it didn’t look nearly as good as it does here.

I am very fortunately to actually own this film on the Simitar Godzilla DVD box set release from 1999, which features this movie in perfect quality and in widescreen. This box set is of the highest quality, totally blowing away the insulting Sony Godzilla DVD box set with some of the same movies, including “Godzilla vs. Mothra,” only in very poor quality. If you have the hundreds of dollars to spend, finding a used Simitar DVD set is the way to go.

Of course, another plus is that this is the only Godzilla movie ever to have monster scenes filmed for the American release that were not included in the Japanese release. Of course, seeing this on widescreen rules!

This is also a landmark film because this is the last film of the original series where Godzilla is completely on the bad side. Absolutely not to be missed by any serious monster or sci-fi/fantasy fan.