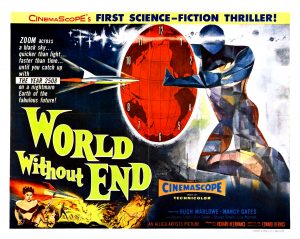 The first 15 minutes or so, the viewer is shown a rocket traveling from Martian orbit which subsequently takes off suddenly at a fantastic undefined velocity. The special effects imply that it is going through some sort of convulsion or warp. The rocket eventually crashes on some planet.

After the astronauts start to explore the “unknown” planet, they encounter some unearthly phenomena such as a surface reading of elevated background radiation that would be uncharacteristic of comparable measurements on earth. Tnen, inside a cave, they encounter a giant spider (a staple of 1950s SF, somewhat hokey here) which would be impossible on the earth that they knew. Sunsequently, they meet a group of savage humanoids that could be throwbacks to a stone age era. Now, the key point which I never forgot – a visit to an abandoned cemetery that contains monuments dating back to at least the 20th century on earth. This shocking detail reveals that they have somehow returned to earth, but not the earth that they knew. Then, they discover the grave of someone who lived from the years 1985 – 2068 !!! (The astronauts went into space around 1957) The concept of time dilation dates back to the Einstein Special Theory of Relativity and I have been fascinated by the possibility ever since. The astronauts try to speculate about the velocity that they actually attained, beyond 100 miles / second – or, was it 1000 miles/second, 10000 miles/second, or faster still (the velocity of light is 186,000 miles/ second at which fundamental physical concepts such as length, mass, and time undergo fantastic values in magnitude). As one approaches the velocity of light, time becomes asymptotic and at actual light speed, time is reduced to 0. According to physicists, light speed is the absolute limit in the universe. That is why concepts such as warps in space-time are being discussed as possible methods of achieving faster than light conditions. In any case, the astronauts discover that sometime between their departure in 1957 and their appearance on earth several centuries later, there was some horrific atomic world war that decimated civilization as they knew it.

The astronauts are chased into a cave by the savages in another encounter where they meet descendants of survivors of the atomic war living underground. At this point, the plot starts to focus on human interactions and the various behavioral passions and characteristics (including human frailties and weaknesses such as mistrust and jealousy) that seem to be universals in any era of the history of mankind, from ancient times to the present, to the future time of the year 2508. The girls in the movie are all knockouts (especially the bare-legged ones) which are a staple of 1950s SF (such as in “Missile to the Moon”, “Queen of Outer Space”, and others). After a number of debates followed by an act of treachery by one of the men from the future, the astronauts finally convince the subterranean people to let them fight their way to the surface, fight off the savages, and establish a base upon which the underground people can rebuild civilization.

As the future men and women from the year 2508 rebuild civilization, would they be able to control their negative passions in order to create a world at peace? Or once re-established on the surface, would new kingdoms, principalities, and nations take root again followed by the usual cycles of peace and war ? The saga of human history is marked by cycles of rise and fall and then subsequent rise and fall. Is this all we humans can do ? Or can we do better ? Can the human race rise above the flaws and frailties that made the atomic war (and all of the wars before it) possible ? Or can we learn to put intellect above violence and put an end to war forever ? Would this imply that Homo Sapiens would really learn to live up to its name. The term “Homo Sapiens” means “wise man”. How “wise” are men who slaughter each other in cycles of wars that have come close to destroying entire segments of the population ? How “wise” would we actually be to destroy the earth and us with it ? There is nothing “wise” about taking another human life. Wars have plagued us humans from ancient times to the present. Can we eventually learn to control our lower instincts and passions in order to make war impossible? Can we truly create a civilized human order at peace with itself? These are questions that function as the subtext of the movie.

0 166
STAR WARS TREATMENT HAS BEEN WRITTEN