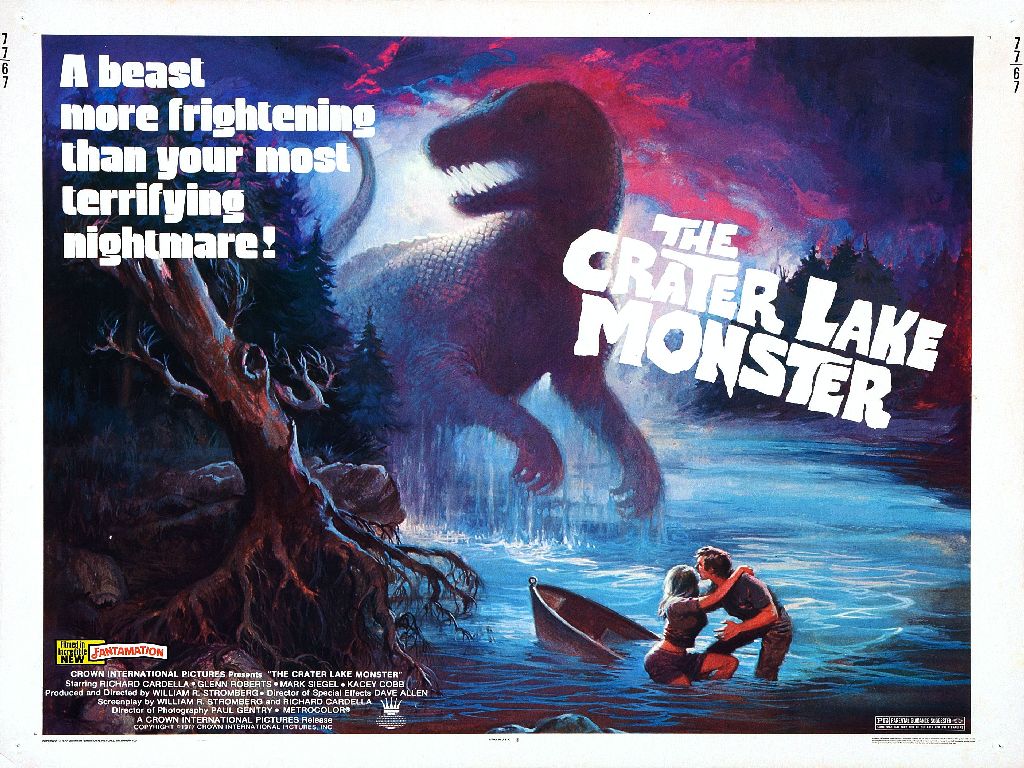 A claymation plesiosaur rises from the depths of Crater Lake to wreak havoc on a group of local rednecks, not to mention your fast forward button. To call “The Crater Lake Monster” amateurish is to overstate the obvious. If you aren’t a fan of low budget drive-in films, you probably wouldn’t be looking here in the first place.

The problem with the movie is that when there’s no monster action going on, it really sucks and goes nowhere. The script is very Ed Wood-ish, in that it’s utterly contrived in the way it sets up the main action sequences. Nothing is too outlandish for “The Crater Lake Monster”. It explains its dinosaur by having a meteor crash into Crater Lake, ‘superheating’ the water to the point where it incubates a dinosaur egg that has apparently been resting at the bottom of the lake for millennia. Even if we could accept that the egg could have been lying there for so long and remained uncovered and viable, wouldn’t “superheating” the water to such a high temperature cause most of the lake to evaporate? Other than some token fog in one or two scenes, we see no evidence of the water being hot, other than a few lines in the script.

The script is padded rather obviously in a few sequences, and it will do anything to get the characters near the lake so that they can be menaced by the claymation dino. A couple just passing through experiences car trouble and while their automobile is being serviced, they decide to rent a boat and head out into Crater Lake. Hmmmm…do you think these strangers in the story could be there so they would run into our title monstrosity? In a sequence that’s just plain bizarre, a drunk robs a liquor store and decides to murder the cashier and a bystander instead of paying four dollars for a bottle of booze. A car chase ensues, and wouldn’t ya know it…they end up right by the lake. Snack time for Cratey! Yeah, it’s not hard to figure out, and you’re so far ahead of the script that you’re irritated when it takes another ten minutes for these scenes to unfold.

The shamelessness of it all is endearing, and I really want to like “The Crater Lake Monster”. I just can’t do it. There’s not enough here to go on, and this is more of a movie to put on during a party, because you could talk right over it and it wouldn’t matter.

The film has a slim list of the things going for it, the most important being the dinosaur itself, which appears in three forms: a shadow puppet, a large model head that is dragged woodenly through the water, and a fully realized claymation insert that actually looks pretty good. There are also a pair of lovable hicks in it, and they carry the majority of the intentional humor in the movie. A downbeat ending leaves us mourning the death of both the monster AND one of our beloved hicks, so every good thing about this film is dead by the end of it.