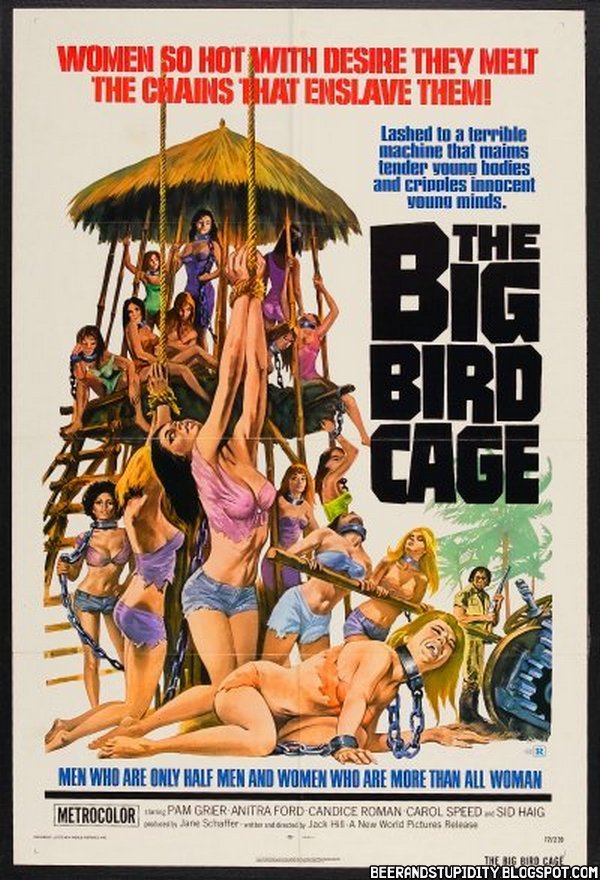 This was the third women in prison (WIP) movie produced by Roger Corman’s New World Pictures within just two years, beginning with THE BIG DOLL HOUSE and WOMEN IN CAGES, both released in 1971. In spite of the similar titles, there’s no narrative connection between BIRD CAGE and DOLL HOUSE, though the films were later shrewdly retitled `Women’s Penitentiary I’ and `II’ by distributors who hoped each film would capitalize on the other’s popularity. Director Jack Hill, who also helmed DOLL HOUSE, says Corman hired him to make a sequel, but since the WIP genre had already become formulaic and predictable, Hill played up the humor and delivered a parody instead. Like DOLL HOUSE, the film features Pam Grier and Sid Haig in prominent roles and was shot in the Philippines. This time, Hill makes much better use of both actors as well as the beautiful locations.

Perhaps the movie is best remembered as the screen debut of Anitra Ford, the exotically beautiful model who turned quite a few heads as well as price tags on television’s THE PRICE IS RIGHT game show. She plays Terry, an American tourist visiting a Central American banana republic where her indiscreet flirtations with the prime minister get her in trouble with the governing party. She’s sent to a bamboo shack prison for women staffed exclusively by gay guards and centered around a towering, archaic-looking sugar cane mill, the `big bird cage’ of the title. The warden (Andy Centenera) designed the structure himself and is more than willing to sacrifice a few of his charges now and then to keep it in working order. At one point, an unfortunate prisoner is crushed to death when she’s forced to crawl under the contraption to reposition a gigantic, misaligned cog.

Prisoners who lose their wits are permanently confined in a cage for `crazies’ while those who attempt to escape are tracked down by attack dogs. Regardless, Terry makes a run for it and nearly gets gang raped in the process. When the effeminate head guard Rocco (Vic Diaz, who has been called `the Peter Lorre of the Philippines’) catches up to her as she’s being molested by half a dozen local men, he dryly comments, `Why doesn’t that ever happen to me?’ As punishment for her attempted escape, Terry’s left hanging from a rope tied to her long, dark tresses. Talk about having a bad hair day!

The other inmates are the usual batch of rag tag stereotypes. There’s the butch top dog (Teda Bracci), the sex starved nymph (Candice Roman), and a pathetic new kid (Marissa Delgado) who’s befriended and championed by the heroine. The most original character is an Amazonian lesbian (Karen McKevic) who’s supposedly so violent she must be chained to her bed, though she looks more like an unusually tall anorexic. She seems to have been included strictly for laughs: in one especially silly scene, she smears chicken fat over her body hoping to slip past her other cell mates so she can get her hands on a teasing tormentor.

Curiously, the most entertaining parts of the film don’t involve the prisoners but rather a nearby group of revolutionaries led by Blossom (Grier) and Django (Haig). Neither actor has ever been more appealing in any role and they work brilliantly together. In the opening scene, they pose as musicians in a local band to burglarize a seedy nightclub and Grier actually sings on the soundtrack. Later, they wrestle in the mud before kissing and making up. As they noisily make love in a hut, another bandit ruefully comments, `What an army we could raise if we only had a lot of women…. Where could we find [so many] women to steal?’ Thus are the unlikely seeds of a prison break sewn!

Haig is hilarious in the scenes where Django `camps it up’ flirting with the guards to weasel his way into the prison staff and Grier leads the eventual riot with her usual gusto. The film features lots of action including a fiery finale. There’s also quite a bit of nudity, though unfortunately only a few brief glimpses of foxy Ms. Ford in the buff. She shows a bit more skin in her next two films, INVASION OF THE BEE GIRLS and STACEY (both 1973).

0 146
Sing A Simple Song: Moving The Movies Back To The Basics