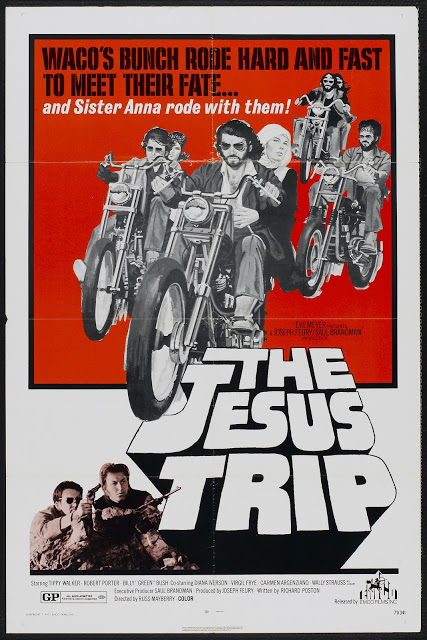 A mixed-gender group of shaggy but harmless bikers, who’ve apparently just rented or bought their hogs, are stopped by a Border Control agent (Billy Green Bush). They flee, fearing the bikes may be “hot.” Then they discover that the bikes are in fact carrying loads of pure heroin. (It was a little unclear to me whether the border control agents already knew that, and were engaged in smuggling.) One of the bikers gets wounded in flight, and when they all hole up at a desert convent, they have another altercation with the agent and flee with a young nun (Tippy Walker) as hostage. But the agent pursues them all with ever-greater firepower and a sadistic streak.

Just about the sole theatrical feature by a director who otherwise did TV movies and episodes for decades, “The Jesus Trip” takes itself seriously and is low on the usual biker-flick exploitation elements, despite a fair amount of violence. Character development could be a lot stronger, especially in charting the relationship between the nun and lead biker Waco (Billy Porter)–one minute she’s a hostage, the next she’s taking off her cowl and falling in love. Still, the performances are decent and the movie is very well shot–at least I think so, based on a so-so YouTube transfer presumably from a VHS tape. There’s an alarming sequence when the agent and fellow cops terrorize captive bikers whom they’ve buried up to their necks in the sand.

Low-key and minimally scored, “The Jesus Trip” is not amazing, but a good example of the kind of offbeat, arty genre films that often turned up (and then immediately disappeared) in the early 70s.