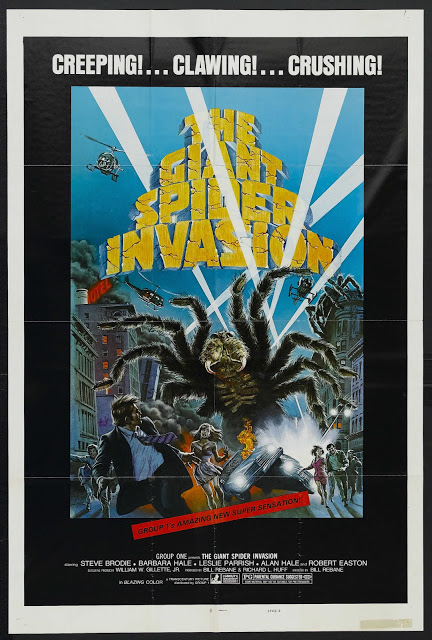 Early on in “The Giant Spider Invasion”, Dr. Jenny Langer (Barbara Hale) is lecturing a group of bored students about different types of stars. What she doesn’t know–and really, how could she?–is that an unprecedented celestial event has just taken place where she lives in Wisconsin: a black hole has come crashing down to Earth! Even worse, the black hole has opened a doorway to another dimension, and thru this doorway has emerged…a horde of malicious spiders of varying sizes! And it’s all going on right in her back yard!

Well, actually it’s going on in the back yard of a common dirt farmer who presides over a household of lowlifes who give new meaning to the term “white trash”. They find some of their “cow” partially eaten (it seems that interdimensional spiders chew their food instead of the traditional sucking of vital fluids). A bunch of normal-sized tarantulas emerge from geodes that also contain diamonds, but nobody really notices the spiders until one medium-sized spider jumps out of a sock drawer, and really, how did it get in there in the first place, we wonder? Then we get a peek at the purveyor of our titular “invasion”: a giant-sized tarantula that looks suspiciously like a motor vehicle covered in furry carpeting and legs. In one fell swoop, Wisconsin has become a dangerous place to live. It’s enough to make a decent spider become a recluse! (har har)

NASA’s answer to this unprecedented phenomenon is one Dr. Vance, a mildly sexist scientist who investigates the strange disturbance with Dr. Langer. You’d think a horde of giant spiders would be pretty easy to spot, but somehow our heroes manage to avoid the reality of large hairy arachnids until they run smack dab into one coming up the other side of a large grassy hill. The spiders seem to have no trouble at all acclimating to our dimension, and begin doing what giant spiders do–spinning webs and trapping people. One unfortunate guy is foolish enough to try and drive his car right through a giant web–talk about a bug splattering on your windshield!

I don’t understand the problem some sourpuss people have with this movie. What in the cosmos did you think you were getting into by watching a movie called “The Giant Spider Invasion”? It is a cheap drive-in movie with a goofy title. This isn’t a James Cameron production. It has very little budget to speak of and no first-rate actors, but the actors here really do enjoy hamming it up. The filmmakers clearly understood that they were in “B” movie territory (well, actually it’s more like “T” or “U” territory), and the dialogue is appropriately hilarious.

The truth is, I think “TGSI” deserves to be in its own category. Although it is a poor film on almost every level, it does not deserve to be considered a truly awful cinematic experience. Nay, this film actually did a great deal of box office business in its day, and for good reason, too. There are truly well-made films that are nowhere near as entertaining as this one. Although the “MST3K” commentary is also hilarious, you don’t really need it, I’m confident that you will not need anybody else to point out what’s funny in this movie.

By now you probably know that this movie also stars Alan Hale Jr, aka Skipper from “Gilligan’s Island”–and yes, there IS a reference joke in the film. Leslie Parrish makes a big impression as the boozy farmer’s wife who finds the black hole on her property. Unfortunately for her, this black hole leads to a dimension full of giant spiders, and she becomes spider chow early on (after enjoying a delicious tarantula-flavored bloody mary).

A few other actors you might recognize are caught in this webby mess (hey, ya gotta pay the bills somehow, ya know?), but it’s Barbara Hale who delivers the goods. Steve Brodie plays her male cohort scientist, but he simply looks bored. Barbara really gets into the part and plays it to the hilt, doing the faux intellectual bit, screaming in mock horror at the tarantulas, and dashing left to right in some cockamamie plan to undo the junk science that has turned Wisconsin into a smorgasbord for cheesy spiders. At one point she lets out a banshee-howl that will make the hair on the back of your neck stand on end. She’s even game enough to roll down a hillside for real. I bet she looks back on “The Giant Spider Invasion” and giggles. A lot.

0 118
Rebuilding The Foundations Of Movie Going