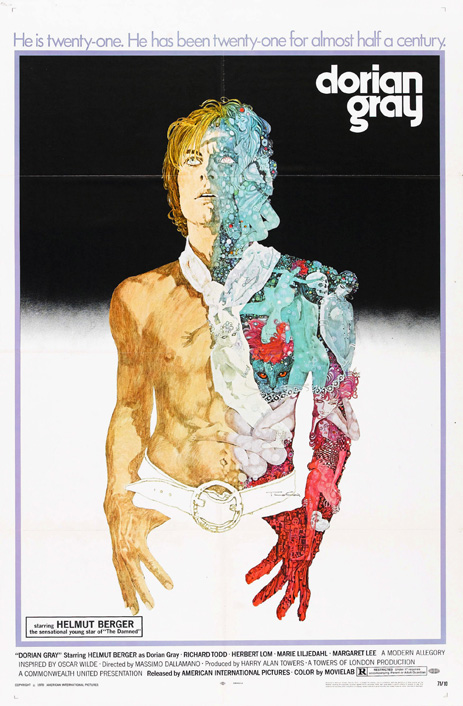 The story is familiar – Oscar Wilde’s Dorian Gray wishes his painting would grow old whilst he remain young. This film version certainly does not equal the production quality of Albert Lewin’s “The Picture of Dorian Gray” (1945), but it is superior in several other ways.

Foremost, the casting of Helmut Berger as Dorian is perfect. Mr. Berger has the “beautiful/handsome” balance necessary to essay the role; he matches his looks with a fine performance, taking Dorian from youth to decadence. Richard Todd (as Basil) and Herbert Lom (as Henry) support Berger well. Dorian’s decadent slide is more appropriately depicted in this “modernized” version; however, the sexual situations run on way too long – for a time, the screen is filled with one sexual romp after another; and, the film loses focus. The sexual situations must have been very risqué at the time, but “Dorian Gray” is not “X-rated”. The film may remain titillating because there are numerous sexual escapades; and, Mr. Berger and the women are very attractive.

The final “confrontation” between Dorian and Basil is used to effectively begin this version with a flashback; it might have helped to begin the 1945 version in this manner. The passage of time could have been better depicted during the early part (the 1940s-1950s) of this 1970 version, but the 1960s look terrific. The aging of Dorian’s portrait is much more realistic in this version, and it somehow seems much truer to the spirit of Oscar Wilde’s original work.