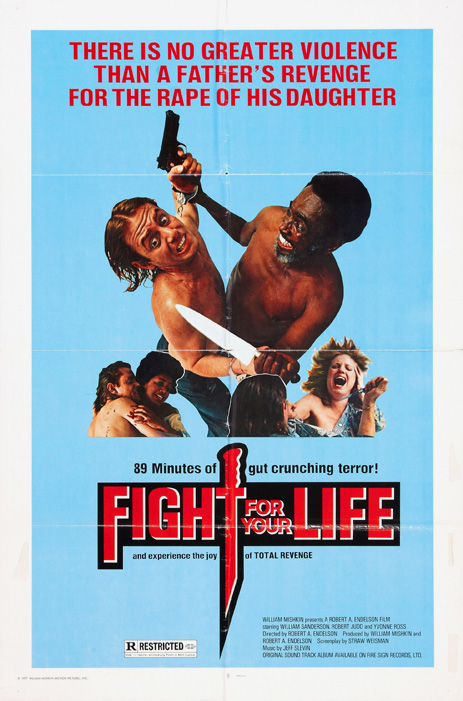 It’s easy to pass Fight for Your Life off as ‘Last House on the Left’ inspired racist garbage, but this film approaches it’s subject matter in an assured and straight-up manner, and while it often gets uncomfortable to watch; it’s hard to deny that the film provokes a reaction in the viewer – and that is the most important thing about a film like this. The film definitely takes influence from Wes Craven’s pioneering shocker, as well as the rest of the ‘rape and revenge’ genre, but by adding racist themes into the mix, director Robert A. Endelson instantly gives his film more scope and more potency, as rather than have the violence directed against one, or a group of people; it’s directed against a whole race of people. The plot follows three inmates that escape from prison. While on the run from the cops, they decide to hole up in a house in the woods, inhabited by a family of black people. These convicts aren’t very nice anyway, but their leader also happens to be an astute racist; and so decides to take out his frustrations on the captive family in the most brutal and humiliating ways possible.

Fight for Your Life benefits from some surprisingly good production values, and a host of well worked and convincing performances. Most of the characters are a little over the top, but it’s easy to believe them and the situation that the film presents. There isn’t quite as much brutality in this film as there has been in many similar films made before or after this one, but the way that the director puts the focus on the things that the characters say increases the tension ten-fold, especially in this day and age, as it’s difficult to comprehend how someone could be so uncompromisingly racist. The scenes that see the lead convict take his frustrations out on the well-mannered family are uncomfortable and shocking, and this is where the film’s power lies. It’s hard to sit there and simply watch what is going on, and while I can’t deny that I thoroughly enjoyed this film; it doesn’t always make for easy viewing. It all boils down to a satisfying conclusion that both gives the audience what they want and brings credence to the lead characters. Overall, this won’t be everyone’s cup of tea; but I found it to be an excellent slice of exploitation and comes recommended to all the right people.