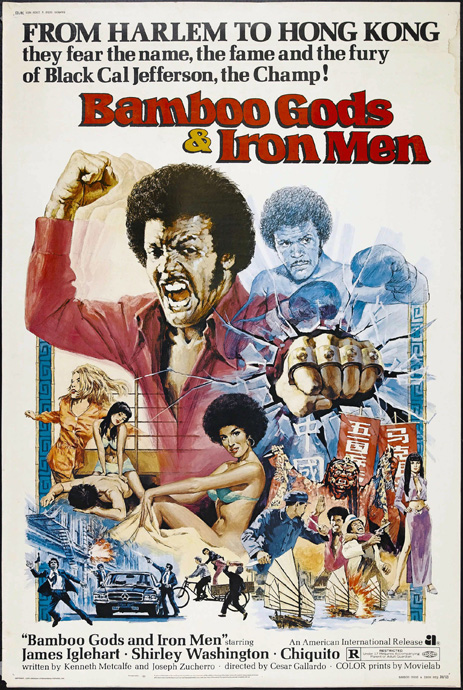 James Iglehart (Randy Black in “Beyond the Valley of the Dolls”) is front and centre for this amiable, goofy Filipino martial arts action flick. Iglehart plays Cal Jefferson, American prizefighter honeymooning in Asia with his new bride (Shirley Washington). While shopping, they obtain a seemingly worthless Buddha statue that actually contains something very valuable to some very bad guys. Leo King (Filipino exploitation mainstay Ken Metcalfe, who also co-wrote the story & screenplay) is chief among them. But Cal has an asset: a mute Chinaman (Chiquito) whom he dubs “Charley”; Cal saves Charley from drowning and the grateful Charley becomes Cals’ constant companion.

“Bamboo Gods and Iron Men” is overall not a terribly memorable movie, but making it above average for a movie of this kind is its generous doses of comedy. It’s often very funny, and director Cesar Gallardo and company play all of this material with real winks in their eyes. This movie has quite a bit of energy, and superb pacing. It also makes sure to be exploitative, of course, with a fair bit of eye candy for viewers. The fight scenes are generally well executed, and the stars all handle themselves capably. The story makes great use of a MacGuffin and concludes with a very bright gag, with several characters bursting into laughter at the absurdity of everything.

Iglehart could easily have had a more extensive career, as he has charisma and good chemistry with the sexy Ms. Washington. Chiquito is extremely appealing, and he and Iglehart likewise make a good pair. The supporting cast of familiar faces includes Metcalfe, offering a decent performance as the villain, Eddie Garcia, and Joseph Zucchero. Devotees of Filipino cinema will be pleased to note the presence of the always welcome Vic Diaz, in a cameo as a hotel clerk.