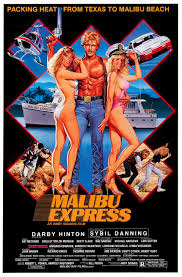 his is the first film I’ve watched from my Andy Sidaris 12-film box set (aptly titled Girls, Guns and G-Strings) and if I had any sense it would probably be the last (sadly, I have very little nous when it comes to my choice in film, so it looks like I have my work cut out for me). Sidaris’s formula is simple: dumb action films with dumb heroes and sexy women. The men boast big ‘taches, big guns and big muscles; the women sport big hair, big tits, and unfeasibly tiny outfits. But while this might sound like B-movie heaven, in Sidaris’s hands, it all proves rather tiresome, the deliberate trashiness becoming really boring, really quick.