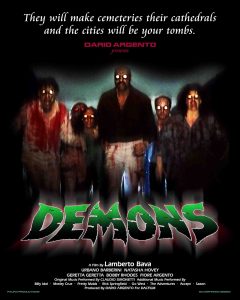 This has got to be one of the best Italian horror flicks ever made, which is no surprise considering it was produced by Dario Argento, master of Italian horror himself.

The plot can be summed up with one sentence: people are trapped in a movie theater with a horde of ugly, long-clawed demons and must fight to stay alive! Sure, the acting is completely over the top and laughable, the movie doesn’t make any attempts to explain why the events are happening, there is really bad ’80s rock music playing at all the wrong moments and the whole production screams cheesy B grade flick, but if you care about any of this anyways, what kind of horror fan are you?! This movie is just an 88 minute roller coaster ride of gore, rock music, and cool demons. What more could you ask for? It isn’t very likely to scare you so much as make you laugh, and there are some classic moments for the genre such as a blind guy getting his eyes scratched out by a demon, a revolting puss-bursting scene, a crazily fun massacre near the end that never gets old to watch, and one of the best climaxes to a horror movie ever where the lead male character severs demon limbs left and right with a sword on a dirt bike! You have to hand it to director Lamberto Bava. He may not ever be remembered as the genius his father was (acclaimed Italian horror maestro Mario Bava), but he managed to create one of the best horror flicks of the ’80s and today. The film exudes with an almost Gothic atmosphere and the setting of the big movie theater could not be more perfect in creating a mood.

A word of caution, though: this movie is a horror buff’s wet dream, and it’s strongly advisable you be sure you like real horror movies before seeing this so you know what you’re getting into. This ain’t no “Scream” or “The Grudge.” This is a REAL horror movie. Fans of modern horror beware! You’ll only end up thinking this was the worst piece of trash ever made.