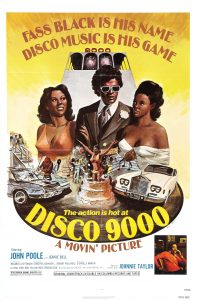 Made during the waning days of blaxploitation, this half-hearted attempt at an action quickie features a unique mix of poor acting, amateur night direction and dialog that must have been written on cocktail napkins.

But what really sets the film apart is, for a movie actually set in a disco, it doesn’t even manage to make the disco parts interesting! The music is awful, the dancers can’t dance to it, and the costuming is actually dull! How the heck do you get dull costuming in a late ’70s disco pic? That alone is a stunning cinematic achievement!

The plot, to use the term in it’s very broadest sense, has to do with Bellamy, an out of town music mogul, trying force L.A. disco king Fass Black into a distribution deal. The fact that Bellamy seems to produce country & western music, while Fass produces and distributes disco, doesn’t seem to faze anyone for a moment.

Also featured in this train wreck is ace tap dancer Harold Nicholas, (who dances not a step!) and a group of dancers from the “Soul Train” TV show who look continually frustrated trying to dance to the terrible soundtrack.